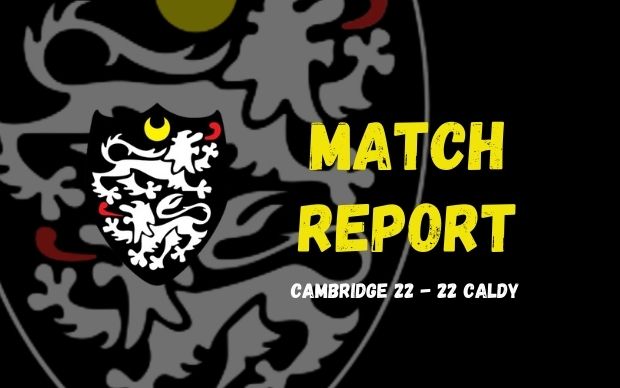 On a fine, if overcast afternoon, Mat Hema led out the Cambridge side in honour of his 100th cap.

The opening encounters were cagey, as they often are, but after about 15 minutes Cambridge won a line out in the visitor’s 22. Although we could not set up a drive, we spun the ball side and after a couple of phases Kwaku Asiedu finished the move n the corner. Unfortunately, we could not add the extras

On our next attack, Caldy were forced to pull down a mall in front of the posts, and we took the points, 8-0 up after 20 minutes.

Five minutes later it was Keiran Frost finishing a move off, and Lawrence Rayner was able to add the extras, 15-0 up. At this point we seemed to be able to disrupt Caldy whenever they had the ball, pushing them back and either earning a turnover, or making them kick to us. But for whatever reason, the ref took an objection to our tackling, and we started to give away penalties, giving Caldy field position, enabling them to slot a penalty to reduce the lead to 15-3 at half-time.

The second half, like the first started slowly, but this time Caldy were able to score first. Again, penalties gave them field position and after an number of pick and drives they were able to force their way over. 15-10.

Joe Tarrant just on for Kwaku injected pace and set us up an attacking position and after a some slick handling Mat Hema, the centurion, was on hand to finish, once again Lawrence was on hand to add the extras.

The penalty count was mounting against Cambridge, and Caldy finally managed to put a series of passing moves together to score a well worked try to get within seven. Cambridge looked to have a good attack and to have won a penalty, but it was reversed and that gave Caldy another attacking position, and they were able to go over in the corner – even though there were protests that there was a foot in touch, the assistant referee was certain the try had been scored.

With four minutes left both sides had attacking opportunities, but neither side could use them, so the match ended in a draw 22-all.
Of the two sides, Caldy probably felt better about the result, happy to come away with something, while the Cambridge players felt it was a game they should have won, and saw it as points lost.