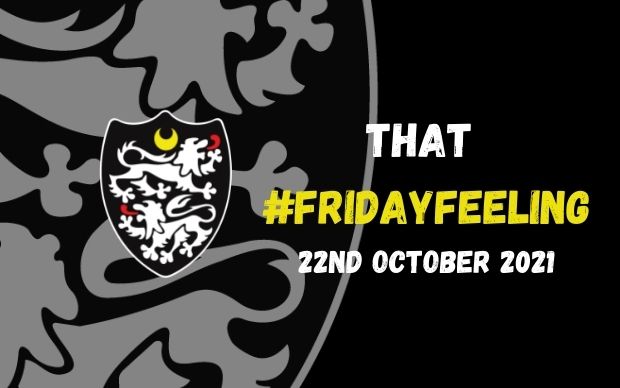 Sometimes in life you just have to hang on in! Down with not long to play and you stick at it and come out with a result! A great feeling for a team to show an indomitable spirit and it builds team spirit and a powerful belief for future games. Last week our team came back from a 15 – 3 deficit away against a powerful Cambridge side to get a 22 – 22 draw. Team spirit is often what sport is about and we are lucky that our team has it in droves.

Our regular and brilliant Friday Feeling author has gone down with COVID and we all wish John and Jan a speedy recovery. In John’s absence I am writing this week’s Friday Feeling as one of many Caldy supporters who were golfing in Portugal last week, and who followed the game on Twitter. There was an enormous cheer in the bar we were playing pool at when Nick Royle scored his brilliant equalising try. And watching the try on Twitter you have to admire just what a class act Nick is. “Give it to Royley” is a cry I often hear on the steps and never was it shown to be more true than last week.

This week we play Tonbridge Juddians for the first time in our history. Isn’t it great that we play new teams and enter games with no idea what to expect. It is part of the excitement of National One rugby – exciting rugby against some of the best teams in the country. A warm welcome to Paton Fields to Tonbridge Juddians and we wish them all the very best for the season, as we less famous teams in National One have to stick together. But tomorrow is about us making Paton Field our stronghold and hopefully the weather will be kind to allow great rugby to be played.

Tomorrow’s match sponsor is Richard Williams. The man Oliver Reed based his life on but Mad Dick Willy in his prime would have had Olly going home to bed early. If one man can epitomise a rugby club then certainly Dick Willy can. His love and passion for all things Caldy is beyond words and many of our squad have stayed in the Swamp in the past and have learnt new and unforgettable life lessons. My first memory of meeting Richard was when I was 17 and Caldy were playing away at Old Birkonians. I was in the 2nd team and a handful were left in the bar in the caring hands of Richard after the game. The round was either a triple Pernod or a yard of ale – not that us youngsters were allowed to buy a round. Richard being Richard was trying to make us youngsters drink salty water to make us sick whilst still buying the drinks. And who can forget the sight of Richard barbecuing in monsoon like rain in the middle of winter whilst wearing only shorts and wellies, as if it was the most normal thing in the world. What a man! Happy 73rd Birthday, Richard!

We are still beset by injuries but we have a large squad and the players who are playing show great pride in the shirt and will be our stars of the future. One player’s injury is another players opportunity to shine and with our great coaches all our players are developing and are showing they can compete with anyone. When we were last in National One we struggled when we had injuries but so far this season the depth of our squad is proving our club’s strength. Saying that we all hope our injured players recover quickly and are playing rugby as soon as they can. After nearly 18 months without playing it must hurt to be out injured when rugby returns.

I am sure we all wish our 2 debutants, Ezra Hinchcliffe and Joe Murray, all the very best for tomorrow and we hope they have long careers playing for Caldy.

Our 2nd team are also at home against Lymm on Saturday (kick off 2pm.) The 2nd team have had a great start to the season and last week racked up their 4th win of the season with a 57-24 win against Blackburn. We are lucky to have some great players in our 2nd team under the careful management of Andrew Souter and CJ. Well done to Sooty for completing 2 marathons in a week, with a combined time only minutes over 6 hours. Fantastic effort! I am sure you can still sponsor Sooty and his nominated charity, injured rugby players, by going to his Facebook page.

Good luck to both teams and I hope all spectators enjoy the day!