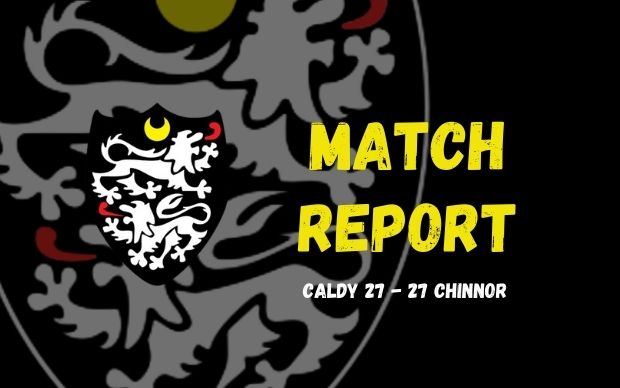 No wind, no rain, and a playing surface as good as any in the country set the scene for this Caldy versus Chinnor clash in National One. 4th placed Chinnor had started the season with 3 wins out of 4 and with impressive pre-season recruitment had established a formidable playing squad. In his pre match address to Caldy’s lunch guests, Caldy Head Coach Matt Cairns acknowledged that this would probably be Caldy’s toughest game to date this season.

How right he was!

After 20 minutes of this pulsating contest the runaway train that was Chinnor RFC, looked to have driven Caldy completely off the rails. The 19 -3 lead, courtesy of three well taken trys by winger Seb Scott, and front row forwards Robin Hardwick and Cameron Terry, was built on the strength and experience of the Chinnor pack. Led by Chinnor’s recent recruits in the form of giant prop Soane Tongauiha and rampaging No 8 Frederick Tuliagi, the Chinnor pack was proving a handful for Caldy.

It looked bleak for the home side but then light appeared at the end of the tunnel. It was the Caldy bullet train coming in the opposite direction. Centre Mike Barlow led the recovery with a well taken score from a driven lineout and then the express pace of Caldy’s Nick Royle out flanked the Chinnor defence with the speedster’s trademark kick and chase. Two successful conversions from Ben Jones and Caldy were suddenly within two points of Chinnor at 17-19. Game on!

Caldy started the second half with an outstanding break by Nyle Davidson supported by Mike Barlow putting Royle in for his second to give a resurgent Caldy a deserved 24-19 lead.

Caldy had the opportunity to score their bonus point try after a penalty attempt by Ben Jones rebounded off the post but alert defence by Chinnor snuffed out the danger and the visitors launched an attack of their own.

It took some great scramble defence by Caldy to keep the counter attack by the visitors at bay until an infringement at a lineout handed possession back to Chinnor who capitalised through a straightforward transfer to the wing and a try in the corner. With at least 20 minutes of game time still to go the 24-24 score line never looked like being the final result and the breathless action just kept on coming.

The departure of the former Premiership star Tongauiha on 65 minutes gave Caldy some respite in the scrums and with the game now being played end to end, the fitter home side looked the more likely winners, but Chinnor were resilient and there was no easy way through their defensive line.

5 minutes to go and a Nick Royle scrag tackle was adjudged to have been a high tackle by the assistant referee. Pretorious made no mistake with the penalty and the visitors looked to have snatched it from Caldy. However, with less than two minutes to go a Chinnor infringement gave Caldy a long-range opportunity to level the game. An assured Ben Jones stepped up to square the game at 27 apiece.

This was an impressive comeback by a Caldy side who despite being without four of their biggest ball carriers found their way back into a game where it looked likely they would be bulldozed to a heavy defeat.

At 19-3 down within 15 minutes and being pummelled by the power of the visiting pack it would have been easy for the team to panic or crumble or both, but they were unflinching. On another day their impressive composure and gritty determination would have given them a deserved win but in the end a draw was probably a reasonable result given such an unpromising start.

The squad will travel to Cambridge next week with the knowledge that they are now finding their feet again in National 1.