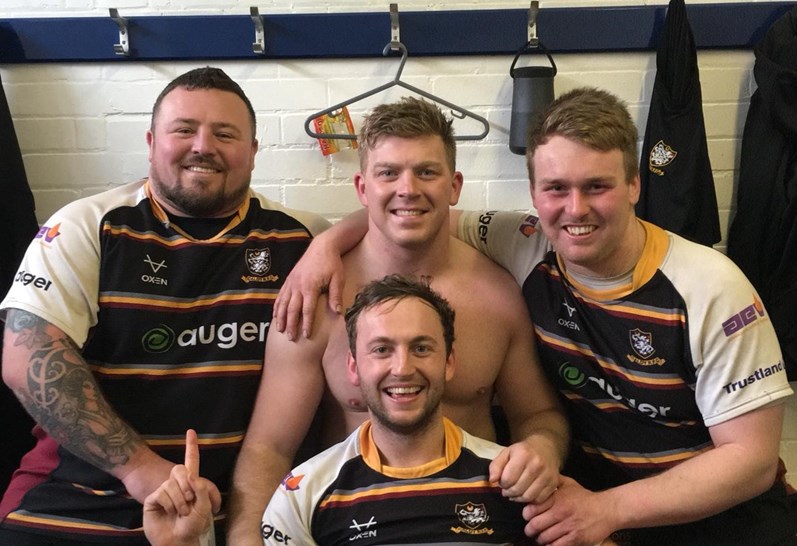 Caldy’s 25th consecutive win of the season secured by 49 points to 5 away against Preston Grasshoppers enabled them to do the double over one of the North West’s biggest clubs and in the process secure the National 2 North title in early March with 5 games to spare. An unparalleled luxury.

In their previous National 2 league Championship season, Caldy won the title with a dramatic 28-26 win over close rivals Sale on the 8th of April 2017, the penultimate weekend of the season. In last year’s ultimately unsuccessful battle against demotion from National 1, Caldy were still safe from relegation at 4.30 p.m. on 27th April, the last day of the season. However, a try by Birmingham Mosely with just a couple of minutes snatched the win from the Wirral side by 12-10 and consigned them to relegation.

Caldy’s Director of Rugby Gareth Davies was delighted with the result and his side’s early confirmation of a return to National 1.

“In the last few seasons, we have been involved in dramatic tussles right up to the very end. This late season pressure takes its toll on players and coaches and there is always somewhat of a hangover into the next pre-season. This year securing the league this early means we are in the fortunate position that we have 5 games in which we can start to mould our game for the challenges to come in next year’s National 1 campaign.”

This season there was no such drama in Caldy’s coronation victory. A young and spirited Hoppers side just had no answer to Caldy’s pace and power. Like all teams before them they struggled to match Caldy in most areas of the game.

The fast 3 G surface at Lightfoot Green suited Caldy, particularly full back Rhys Hayes who had his best game of the season making break after break to put his colleagues into space. The occasion and the immaculate surface was enjoyed by the whole Caldy squad as they piled up the points through the power of the pack with JJ Dickinson and Jack Parker notching up scores and through some sublime handling by the backs with Nick Royle, Rhys Hayes and Mike Cartmill all crossing.

There was much to admire in Caldy’s play. One early coruscating run by Hayes from deep within his own half evaded numerous tackles to put him in at the corner for a splendid individual score. As the game broke up Caldy’s attack took charge. Another sizzling break by Hayes linked him with the giant second row Tom Sanders whose thundering gallop down the flank combined with Nick Royle to put the Caldy speedster in at the opposite corner. Caldy were not going to be denied their win.

Scrum half Cameron Davies was causing mayhem. His power around the ruck was acting as a ninth forward for Caldy, taking two or three Preston players to stop his powerful darting runs. But trying to stop the scrum half’s incursions just created further gaps out wide which the destructive Adam Aigbokhae exploited to put centre Mike Cartmill in for another score.

The win kept Caldy, 29 points clear of second placed Fylde and confirmed the Wirral side’s immediate return to National 1. However, Caldy still have 5 more tough games in National 2 North to see out and to try and accomplish an unbeaten campaign and establish a few records in the process.