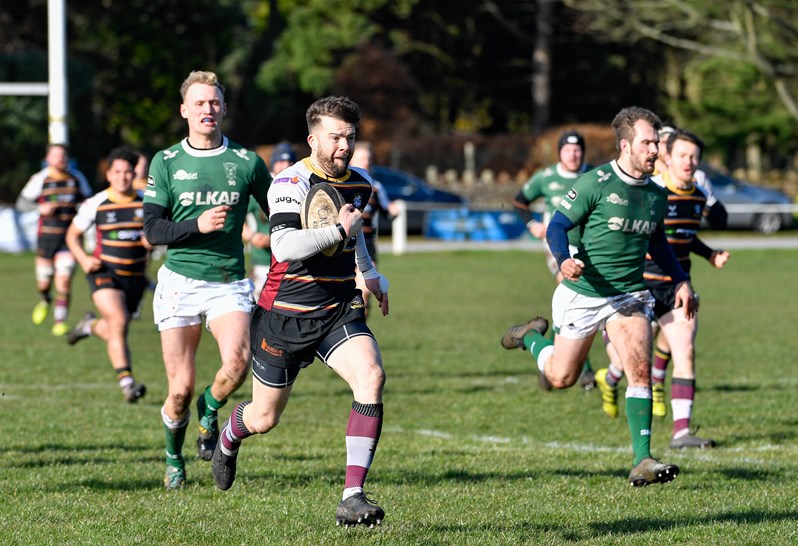 Last weekend’s century of points against a struggling Scunthorpe side was Caldy’s 24th consecutive victory of the season. Scunthorpe, who have recently suffered the tragic deaths of two of their players, gave a battling and resilient performance and left Paton Field with their pride intact and their chosen charity boosted by a £540 donation from Caldy supporters.

The win against Scunthorpe concluded a strong February for the league leaders enabling them to start Spring 29 league points clear of second placed Fylde. However, Head Coach Matt Cairns is very much focussing on what has to come rather than what has been.

“This whole season is about developing our senior squad and our playing style. Having this points cushion is of course pleasing but the senior squad has no intention of sitting back on its laurels. National League rugby is a very tough and attritional sport and we prepare for each game in the same focussed way.”

“We have 6 games to go including this weekend’s tricky fixture at Lightfoot Green against Hoppers. Their season has been hugely blighted by injury but in the last few weeks they have started to get some of their big players back and their form has really picked up. Hoppers will be gunning for us that is for sure and the ‘Arnie’ factor adds a bit more frisson into what is very much a derby fixture.”

Preston Grasshoppers’ head coach Paul Arnold (‘Arnie’) is sure to fire up his players for the encounter against the league leaders. The giant second row spent a season at Caldy where he was a firm fans’ favourite, scoring an outstanding 27 tries in a single season, an all-time National League record for a player in his position. Arnie called time on his playing career at the end of last season after clocking up 450 games which included appearances for amongst others Sale Sharks, Fylde, England Counties, the Barbarians and Caldy.

One of the most famous and prestigious of all Northern rugby clubs, Preston Grasshoppers’ is thriving and running probably more senior rugby sides than any other in the National Leagues. Due to a staggering injury list, they have unfortunately found themselves in the relegation zone as this season draws to a close.

Hoppers still have the slight chance of climbing out of trouble if they can win all their remaining games, including the match against Caldy. Recent spirited performances against a very powerful Hinckley side and last week away against Chester, where they were unlucky to lose, is clear evidence of their resurgence. Preston Grasshoppers are dangerous and hugely motivated opponents, and they are sure to make it very difficult for Caldy to record another win.

Head Coach Matt Cairns has selected the following side to face Preston Grasshoppers at Lightfoot Green with a 2.30 p.m. kick off.