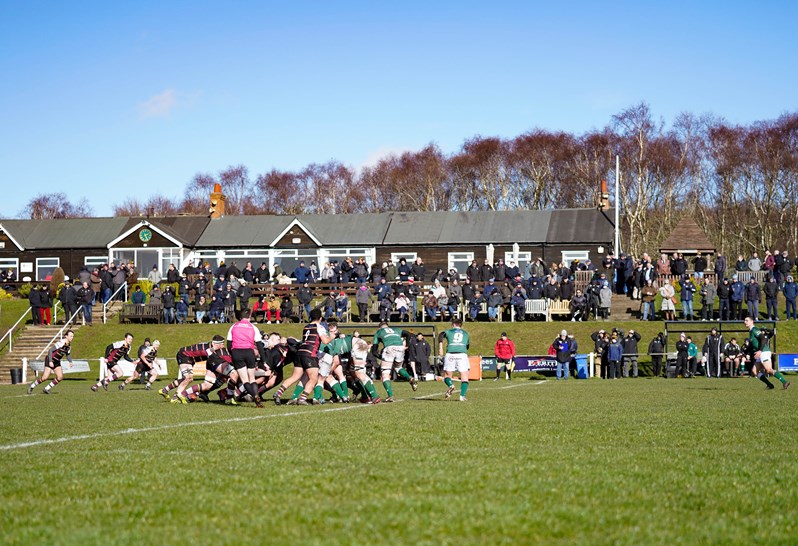 Despite resting some of their top players for this game, Caldy had just too much for Scunthorpe in this one-sided contest at Paton Field. The runaway league leaders racked up 17 tries without reply as they out muscled, out thought and outpaced the visitors.

Even against the elements Caldy were too strong for Scunthorpe and 8 first half tries from Lewis Barker, JJ Dickinson, Gave Roberts with two, Martin Gerrard, Mike Cartmill and Tom Cornall left the visitors and the home crowd fearful what could happen when Caldy had the elements in the second half.

However, despite some of the dazzling footwork and interplay between the Caldy backs and the power of the Caldy pack, typified by Man of the Match Jack Collister, on this occasion a lot of the plaudits should go to a young and inexperienced Scunthorpe side. They were playing against a vastly more experienced and more powerful side, but their heads never dropped.

Having endured a torrid first half which ended with them 54 points in arrears, this could have been the signal for Scunthorpe to throw in the towel. They didn’t. For the full 80 minutes they fought at the breakdown, chased back to make tackles when further scores by Caldy looked certain and when they got possession, they played some rugby. But it was to no avail. 9 tries in the second half by the home side with three from the outstanding pace man Nick Royle, another couple for Tom Cornall and Mike Cartmill and ruthless efforts by Nyle Davidson, Ryen Spencer-Wolfe and Rhys Hayes resulted in Caldy racking up a century of points.

There was much to admire in Caldy’s rugby. Some exceptional handling and accuracy in very tough conditions allowed some personal landmarks to be reached. Nick Royle scored 4 tries to reach the astonishing total of 300 National league tries and captain and No 8 JJ Dickinson notched his 99th try for the club and would have hoped to have reached his century of scores, but his opportunity was thwarted when he was rested in the second half.

The most dazzling of scores came mid-way through the first half, courtesy of the brilliantly balanced running from centre Gavin Roberts. Breaking from the Caldy 22, the Welsh Wizard stepped and swerved past 4 or 5 despairing defenders to score under the posts, making his own conversion kick somewhat simple despite the opposing 50 mph wind. The delighted home crowd would have wanted to enjoy a replay of such brilliance. But without the benefit of a big screen there was only one solution and Gav Roberts duly obliged as he repeated the feat minutes later. With a tally of 22 points from the match, Gavin Roberts leapt to the top of the National 2 scoring charts with a personal tally of 255 points for the season.

The win has moved Caldy another step closer to the league title.