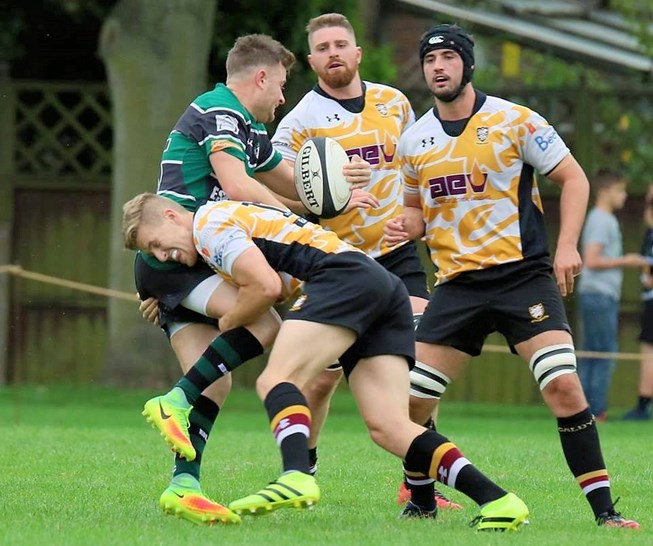 Last week’s 29-10 win away at Sedgley Park extended Caldy’s lead at the top of National 2 North to an impressive 26 points over 2nd placed Fylde. Despite some atrocious weather at Park Lane Caldy came away with the bonus point win after a gritty team performance throughout the side with Mike Cartmill, Jack Collister and Adam Aigbokhae particularly outstanding.

This 23rd consecutive win established a club record for Caldy and importantly the Wirral club satisfactorily negotiated a difficult run of games during the last month as Director of Rugby Gareth Davies acknowledged.

“Coming into February we had a run of four hugely difficult games against Otley, Sedgley twice and Fylde. Each of these games was played in awful weather against hard and seasoned opponents who were all very motivated to get the win. It is a massive credit to the squad that we came through this period with our unbeaten record intact”

This weekend Caldy welcome Scunthorpe to Paton Field. Scunthorpe were initially promoted to National 2 North as Champions of the Midlands Premier league in 2016 but the step up was just beyond them and at the end of the season they were relegated along with Preston Grasshoppers.

Scunthorpe has a resilience and togetherness that is obvious to everyone who visits their home at Heslam Park. After just two years, in 2019 they were again Champions of the Midlands Premier league once more making the step up to the National leagues.

However, this has been a most difficult season for everyone involved with the Lincolnshire side. Before they could find their feet in National 2 North the club was rocked by the sudden death in early November of player James Walker. Recovering from this tragic loss would be difficult for any club but their loss and grief was compounded when only a few months later another Scunthorpe player, family man David Carter, died in similar circumstances.

The strength and spirit of this very fine community club has shone through in this dark period, and their resilience and determination to fight back against the scourge of mental illness through the actions they have taken is uplifting.

Amongst the many very positive steps they have taken are the recruitment of a club chaplain. establishing a dedicated support group for mental health awareness, converting the trophy room to a wellbeing room and promoting mental health issues and awareness through a series of quarterly events featuring professional keynote speakers.

“We are determined to do everything we can to help our young people. The camaraderie and support we have received from rugby clubs and rugby people throughout the country has been inspiring and we are very grateful for it. Despite everything that has happened the spirit within the club and the team is strong and we are very much looking forward to coming to Paton Field this weekend to take on the league leaders”

Caldy President Graham Armitage is also very much looking forward to Scunthorpe’s visit to Paton Field “I know our friends from Scunthorpe will expect Caldy to be very competitive on the pitch, and we will not disappoint them in that regard. However, before and after the game we will embrace them all. It will be a fine day and we will all remember James and David together.”

Caldy will be carrying out a bucket collection during the game to help Scunthorpe’s chosen mental health charity and David and James families. Please give what you can.