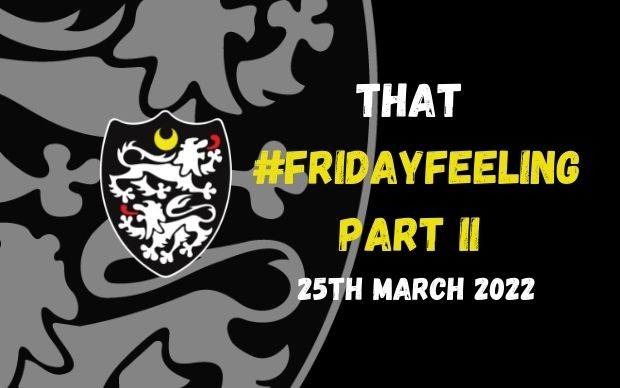 This weekend Caldy’s opponents at Paton Field are the Taunton Titans with a 3 pm kick off. The Southwest club were promoted into National 1 as 2019/20 champions of National 2 South and quickly found their feet in the league with an opening day away win against Leeds Tykes.

52 points from 22 games places the Titans comfortably in 9th place and with a big win last week against Blackheath, points on the road at Paton Field will all but ensure their National 1 status for next season.

Seven tries last week against Blackheath burnishes the Titans’ reputation as a free scoring side as Caldy discovered in the reverse fixture in November. Caldy sneaked the win by 36 points to 31 but the Titans picked up two bonus points for 4 tries and being within 7 points.

It was a very close result for Caldy in Taunton. What were your impressions of them as a side?

Mike: ‘Taunton were a well organised side and they dominated us in the first half. They have some big powerful players, and they score a lot of tries. We came back at them late on to sneak through. They will be tough on Saturday for sure’

Tom: ‘We had never played them before and didn’t know what to expect. They are a very good side and look as though they are now running in to some real form. A few weeks ago they had a crazy game against Sale where Taunton scored 6 tries and just lost it at the death. They started like an express train against us which they seem to do in a lot of games. The boys can’t afford to have a slow start on Saturday.

Joe: ‘It was one of my first games for Caldy and I loved everything about the day, especially the players’ post-match food. It was the best I have ever had at any ground ever! Is it too late to get the match switched to Taunton?’

Ben: ‘Yeh, I had a chat with Graham Armitage on the coach coming back from Taunton. All the old guys were buzzing after their day in Taunton. They reckoned it was by some distance the best pre -match spread in National 1 and just a wonderful set up.’

What are your objectives for the rest of the season?

Mike: ‘We honestly don’t look that far ahead. It is all about Taunton and the big challenge they are going to bring on Saturday. We had the same focus during our run in National 2 North and it works for us, so we stay in the here and now’

Joe: ‘For me we do need to look a bit forward to the end of the season because Jonesy has bought two tickets for the end of season ball, and he has no one to take’

Mike: ‘Agreed. A big objective for the squad is to get Ben Jones fixed up by the end of the season. His profile is never going to be better. Nat 1 leading points scorer, 85 kg but can squat 200kg, bachelor pad, great chef and barista and likes romantic walks on West Kirby beach’

Joe: ‘He should also learn to play the guitar, works for me. I’ll send him a do-it-yourself video’

“Taunton are a very interesting side. Their influence from Exeter Chiefs is clear. A big and very effective pack and with dangerous runners out wide. They generally play a wide game and have a free scoring attack. They can muscle it up as well when they need to. We cannot afford to start slow against them or they will be out of sight.”

Caldy will need to match Taunton’s muscular pack and explosive runners if they are to keep their winning run going. Head Coach Matt Cairns has selected the following side for the match at Paton Field which kicks off at 3 p.m.

Caldy’s record breaking 2nd xv have a tough away league match against Sandbach.

It is important that spectators coming to Paton Field, park in the confines of Paton Field so as not to cause any issues for our neighbours in Pikes Hey Road. In previous home fixtures Pike’s Hey Road has become congested resulting in delivery drivers being unable to access Pike’s Hey.

Please be considerate to our neighbours in Pikes Hey Road and park within the confines of Paton Field.