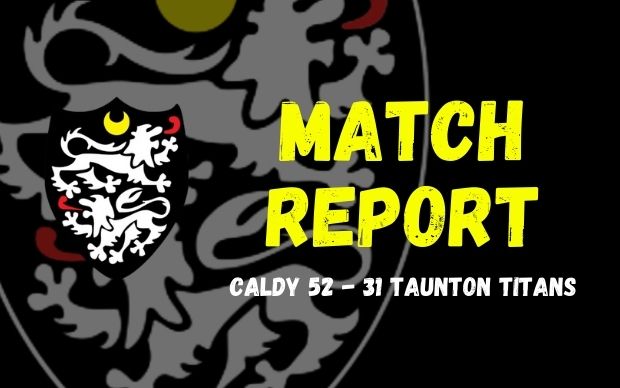 The weather was good enough for sevens rugby and often that was what was served up by two attacking sides on a glorious Spring Saturday at Paton Field. Caldy’s bonus point win lifts them 5 points clear of 2nd placed Rosslyn Park who have a game in hand on their Northern rivals.

Caldy’s head coach was pleased with the performance but acknowledged that his side had been run close by a spirited and attacking Taunton side. “Taunton play the Exeter way and today’s fast pitch and warm conditions absolutely suited them. Our first 10 minutes was exceptional with two great scores from Martin Gerrard and Ollie Hearn but then we perhaps over played and gave Taunton a way into the game. Fair play to Taunton they kept clawing us back and we only really stretched away in the last 5 minutes”

Caldy’s first try came after just 5 minutes. A box kick from the effervescent Joe Murray was superbly won in the air by winger Ben Jones. The winger’s strength and pace put the visitors in trouble and from the ensuing penalty a passage of some dozen or more phases eventually overwhelmed Taunton putting Martin Gerrard in for the first score. Jones added the conversion from out wide. Caldy’s dominant pack laid the platform for the second try by hooker Ollie Hearn and Caldy were cruising.

A three pointer from Taunton’s Iwan Jenkins was backed up by a soft penalty try to bring the visitors right back into it. A hasty clearance kick by Ezra Hinchcliffe was charged down into Caldy’s in goal area. In the 15-metre foot race with Taunton’s prop, Caldy’s no 10 was correctly adjudged to have stretched the laws and the prop’s shirt in his forlorn attempt to keep pace with the burly front row forward, 19-17. This was anything but easy.

Caldy’s normally tight game was becoming looser as the half progressed and the visitors relished the open spaces. The next score could be decisive, and it went Caldy’s way as the home side closed out the half with an individual score by their outstanding no. 8 JJ Dickinson to lead 26 -17 at the break.

When Taunton scrum half Connor Banks notched the first score for the visitors after the restart, again only two points separated the teams. It was anyone’s game. Ollie Hearn’s second score re-established a nine-point gap for Caldy, but the lead was again closed down moments later with Banks’ second try for Taunton. 33 -31 this was tight!

Five minutes to go and with Taunton having secured a four try bonus point, and with the prospect of more to come, the pressure was all on the home side to hold out. Most were expecting a few minutes of controlled possession by the league leaders but instead Caldy upped the pace. A devastating three try burst, with JJ Dickinson, Dave Jones, and Ezra Hinchcliffe all crossing, brought a final flourish to an exciting game of Barbarians style rugby.

As the players and supporters relaxed outside with a beer in the warm evening sun, the delight of a hugely entertaining game of National One rugby was evident. 12 tries, the result in doubt until the last few minutes and great craic between both sets of supporters, this was rugby at its best.

Next week Caldy travel to Rosslyn Park for a top of the table clash between first and second in the league.