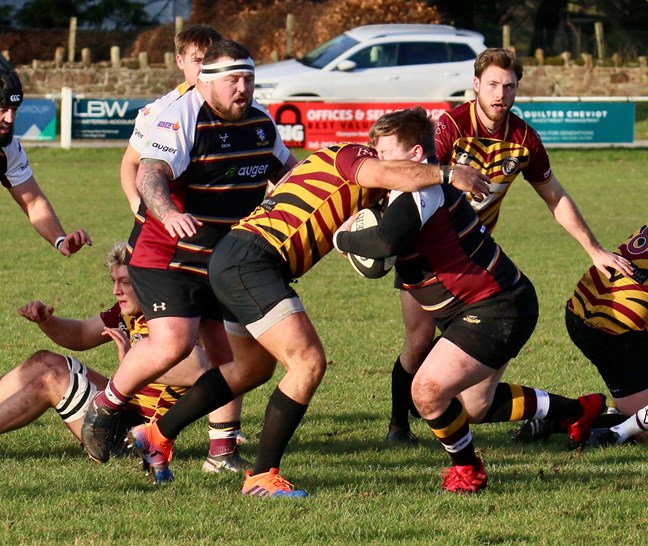 The first match after the Christmas break is always tricky. Facing one of the best attacking line ups in National 2 rugby created a pre match nervousness in the Ravers’ camp. The whole squad had lived up to their name after a sparkling away win against Chester on 21 December and with little in the way of training and a lot in the way of eating, drinking and raving were they going to be undone?

That they won through against a good Sheffield Tigers team was down to the strength of the team and their determination not to let their mates down. The Caldy wall was only breached in the final minute after it had repelled everything the Tigers threw at it. First half possession was probably 70% Tigers and the second half a bit more even but probably still 60/40 in favour of the men from Dore Moor.

The difference was in the small things. Caldy made every chance count and made very few mistakes. Sheffield were committed, competitive but not as clinical.

Five minutes in and it had been all Tigers but for all their possession there was no way through the Caldy defence. A turnover and Caldy were on the attack putting the effervescent Ben Jones in for his 11th try of the season. The pattern was repeated minutes later when Nick Royle sitting deep in the Caldy half picked a wayward pass out of the air and set off on a 60 metre run to the line, skinning the Sheffield back three in the process, Both tries were converted by the peerless Gavin Roberts. It must have been difficult for the visitors to find themselves trailing after dominating possession and territory.

Perhaps cognisant of the danger that the Tigers posed, Caldy decided to kick a penalty from the opposition 22 to push the lead out to 3 scores. For once Gav Roberts missed the mark, perhaps affected by the sudden bout of the ‘crab apple two step’ that was to see him leave the field moments later. However, the miss didn’t help the visitors as powerful centre Mike Barlow seized on the rebound from the upright to crash over and turn a possible 3 points into 7 points.

In the second half Caldy upped the tempo and scored further tries through Ben Jones, Cameron Davies and Jack Parker whilst leaking a consolation try to Sheffield with the last play of the game.

It was a decent enough win against strong opposition but there was some frustration amongst the Caldy ranks as giant 2nd row Tom Sanders explained “We were not at our best today and we didn’t execute in the way we planned to. To be honest we were sloppy in the maul and we need to iron out these mistakes before we get any further into the second half of the season. We have Loughborough Students next week. They gave us a really tough match at their place and they will make us pay if we are not right on it”

Caldy’s next match is at home against Loughborough Students next Saturday 11th January with a 2.15 p.m. kick off.