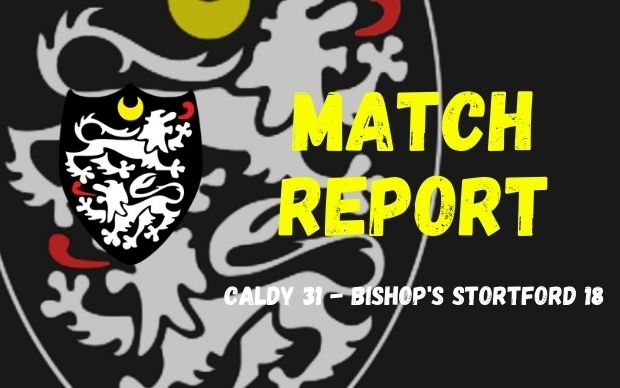 After last week’s epic top of the table encounter against Rosslyn Park at the Rock would Caldy have enough to pick up their 15th win in succession against Bishop’s Stortford?
5 tries with full back Elliott Gourlay picking up a brace and scores by Nick Royle, Adam Aigbokhae, and Mike Barlow got the job done for the Wirral side but Bishop’s Stortford played their part in another hugely entertaining game of National 1 rugby at Paton Field.

The first score came from the boot of Stortford’s Alfie Orchard before Caldy looked to pull away with scores from Royle and Gourlay, the second try being a scintillating team effort putting Ben Jones in space to provide the final scoring pass to Gourlay. Moments after Jones kicked his second successful conversion, Caldy were standing behind their own posts after a smart counterattack brought Stortford roaring back with a score in the corner from winger Josh Stannard.

Caldy pulled ahead again through a score by Barlow, but the resilient visitors countered a second time through Stannard and after another successful penalty from Orchard Bishop’s Stortford were only 3 points adrift at the break 21-18.

The first half had been full of end-to-end adventurous play by both sides and there was every likelihood this was going to be another ‘Taunton’ rollercoaster for the large home support to fret over.
Playing with the benefit of a stiff breeze behind them the advantage looked to be with the visitors, but after a cagey start to the second half by both sides, a more controlled performance by Caldy eventually brought the bonus point try for Elliot Gourlay and a final score for the indefatigable Adam Aigbokhae.

This bonus point win keeps Caldy at the top of the table for another week. On Easter Saturday Caldy will travel south to Reading to play 5th placed Rams RFC in a tough final away fixture, which will be made all the tougher by the expected very heavy Easter traffic made all the worse by the absence of any rail service and compounded by the many tens of thousands of football fans travelling South from the North West for the FA Cup semi-final.