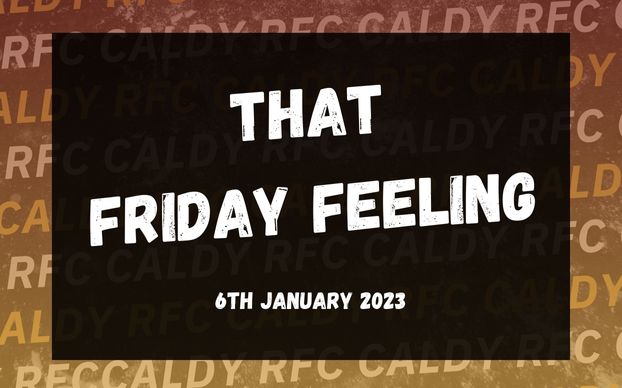 Here is hoping everyone has a great 2023 and that at Caldy we continue to enjoy our journey in the English Rugby Championship.

As the great Yogi Berra once said tomorrow’s game is “Deja vu all over again”. We welcome our visitors from Ealing Trailfinders for the game that was postponed on the 23rd December. When The Ealing officials confirmed they would be coming to the pre–match lunch regardless of whether the game had to be postponed, we had to arrange for the lunch to go ahead with or without rugby. And the Caldy faithful, with only a few dropping out, came to the lunch and for once didn’t have to worry about going out in the cold to watch the rugby. Whether Ealing went back with a deeper insight into the Caldy psyche I am not too sure, but the people who could remember the long lunch thought it was great fun. Well done to Scrivs, and everyone involved.

Boxing Day saw Caldy play Doncaster Knights away at Castle Park. It was our biggest defeat of the season so far and I can’t help but harbour the thought that playing the day after Xmas celebrations would suit a professional team more than us. As someone who didn’t abandon their longstanding Boxing Day commitment to cook a Turkey Curry for our family to enable me to travel to Doncaster to watch the game, I am in the camp that rugby remains a sport, rather than a profession and that it is a lot to ask of players, coaches, and supporters. Playing in the Championship, however, brings certain responsibilities and clubs have a duty, and need, to generate large crowds and boost income and it is a price we must pay for the honour of being in the second tier of English rugby. On the day our boys met a very fit and efficient Doncaster team who capitalised on our mistakes to give us our biggest defeat of the season to date. Well played, Doncaster Knights!

Ealing are sitting top of the Championship for a very good reason – they are a very, very good side. With a large, professional squad under the guidance of Ben Ward, their DOR, as well as a panel of full-time professional coaches, they are certainly set up to compete in the Premiership. Certainly, no one could argue that their owner and benefactor, Mike Gooley, does not deserve to see his team playing in the Premiership. Under his overall guidance, they now have great facilities, a very strong academy (and when we were in National One we would play against Ealing academy players on occasion), have set up a Foundation and their Women’s team has now been accepted into the Women’s Premiership. With international players in their ranks as well as young players predicted to reach the highest level, it will certainly be a test for Caldy. However, this is the joy of being in the Championship – a chance for our players to test themselves against the very best. And, at the end of the day, it is 15 against 15 and our players have shown reputations do not intimidate them and our coaches will have been planning and working hard in readiness for the game.

With Adam Aigbokhae still suspended and Andy Darlington on his honeymoon, this has meant we have had to call on Sale Sharks prop Joe Jones and Jack Parker makes a very welcome return to the squad. It is also great to see Lewis Barker returning after 18 months following his ACL injury

Whilst it is great to play against the top sides in the Championship there is a mini-league going on at the bottom of the table. As this is written Caldy are 2nd from bottom of the table on 13 points with London Scottish on 9 points and Ampthill on 15 points with all to play for. On the 14th January we play Richmond, a team we beat away after a great comeback, and our coaches will most certainly be targeting that as a game we will aim to win. If you can, make sure you come along, bring a friend, and lift the lads with roars of support from the Bank.

Our 2nd team are also playing tomorrow. It is a double header away at Burnage, with our home game having been called off by Burnage earlier in the season. The 2nd team to play is:

Let us hope the lads keep their unbeaten run going!

Finally, please be considerate of our neighbours on match days and do not park on Pikes Hey Road.