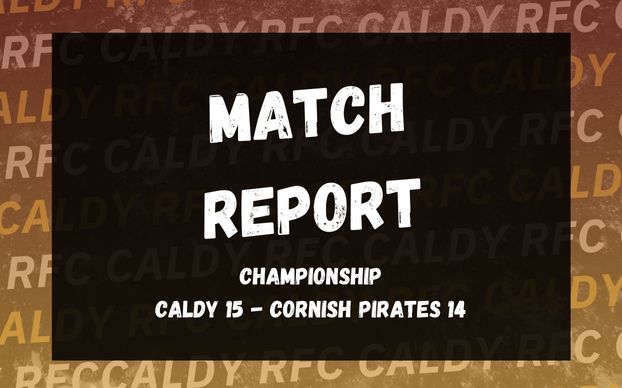 Caldy can thank their ever-present band of volunteers for enabling this game to be played after the Wirral was hit by a mid-morning 3-hour blizzard. The battle to clear the lines and the viewing areas was well worth it as the home side pulled out a gritty and astute performance to clinch their first home victory in the Championship.

Caldy Head Coach Matt Cairns was pleased with the performance. “We have been close in a few home games this season, and it was pleasing to eventually record a victory in front of our own supporters.”

The visitors had started the brighter with two quick converted scores from Ruardih Dawson and Shae Tucker who exploited chinks in the Caldy defence to open a 14-point gap in as many minutes. Caldy were struggling to get any sort of foothold in the game and when on the 20-minute mark the Pirates again broke clear with an unopposed run to the line it looked ominous for Caldy. A truly outstanding match-saving cover tackle by Caldy hooker Ollie Hearn thwarted what seemed like a certain score, changing both the mood and the momentum of the game.

Caldy started to gain some field position and an Elliot Gourlay penalty chipped away at the deficit, leaving the Ravers only 11 points in arrears at the break.

The second half was dominated by the Ravers. As the Caldy pack charged forward with the ball at their feet it gave the opportunity for evergreen speedster Nick Royle to win a foot race for a score in the corner. Caldy kept up the pressure and field position, driving up the penalty count against the visitors. Eventually, after numerous phases on the Pirates’ line, Man of the Match Mike Cartmill went over for what was the winning score.

Although the home side imprisoned Pirates in their own half for the rest of the game, an unfortunate accidental clash of heads between Caldy prop Adam Aigbokhae and a Pirates player resulted in a red card for Aigbokhae leaving Caldy to see out the remainder of the game with only 14 players

Pirate’s Head Coach Gavin Cattle acknowledged Caldy’s dominant second half performance “Caldy out witted us in the second half and were deserved winners. They brought more energy and physical presence to the game, and we can have no complaints about the final score”

No 15 Elliott Gourlay, No 10 Ezra Hinchcliffe and No 12 Mike Cartmill all had their finest Championship games for Caldy and in Nick Royle the home side had a clinical finisher. As for the forwards, they were just immense with opposition head coach Gavin Cattle picking out flanker Callum Ridgway for special mention.

Everyone put in a big shift including the somewhat weather diminished home support. Hopefully those Caldy supporters that couldn’t attend the Paton Field winter wonderland stadium will be able to get to Caldy’s next home fixture this coming Saturday 17th December against Premiership side in waiting Ealing.

No team has yet extracted a point from Ealing so Caldy will need the largest, passionate and vociferous support it can muster to get a chance of Christmas cheer. Nothing is impossible for the Ravers!