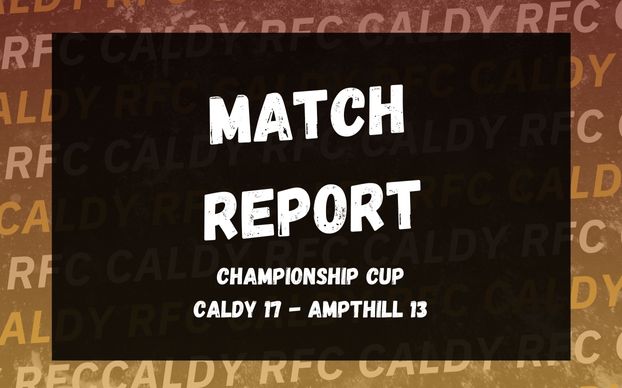 Caldy secured their first home win of the season in Pool C of the Championship Cup against Ampthill in challenging conditions at Paton Field on Saturday.

Both sides had chances from the league match a fortnight ago and it was the visitors who started the better and took the lead after just four minutes. After a successful scrum in the midfield the ball went wide, a great interplay between Josh Skelcey and Jackson saw Jackson going over for the opening score of the afternoon.

From the restart, Caldy looked to bounce back immediately and were unlucky just minutes later. But the visitors knew that they wouldn’t have it all their own way.

Caldy were rewarded at the midway point of the first half after a rolling maul turned into a ruck which saw Ryan Higginson go over in the corner for his first of the season.

Caldy looked the more powerful of the two sides and were unfortunate to be penalised on the half hour allowing Conor Rankin to stretch the Ampthill lead to five points at Half time.

Rankin scored the first points of the second half through another penalty, however, this was the moment that the Caldy tide started to turn.

After two close misses from Ben Jones penalties, Caldy found the breakthrough they were looking for after a penalty advantage on the Ampthill 22 Metre line saw great cross-field play involving four players, which resulted in a try for Callum Ridgeway and the home side players and supporters were confident of a turnaround.

The comeback was complete when Nye Thomas made a break of 50 meters which saw the ball go to another Caldy first XV debutant Ruben Birch who picked up the ball to score with his first touch.

The final minutes of the game were a battle between both sides with the weather conditions not helping either side and unfortunately, Caldy Captain JJ Dickinson came off with what looked like a hamstring injury but will be assessed in the week.

Speaking after the match Head Coach Matt Cairns said about the performance “It’s always good to win and I think that’s what we needed, we are still finding our feet at this level and improving every week”.

Next week Caldy are at home again in the Championship Cup against Cornish Pirates, which will be the two clubs’ first ever meeting.
The South West club beat Richmond 62-7 on Saturday.