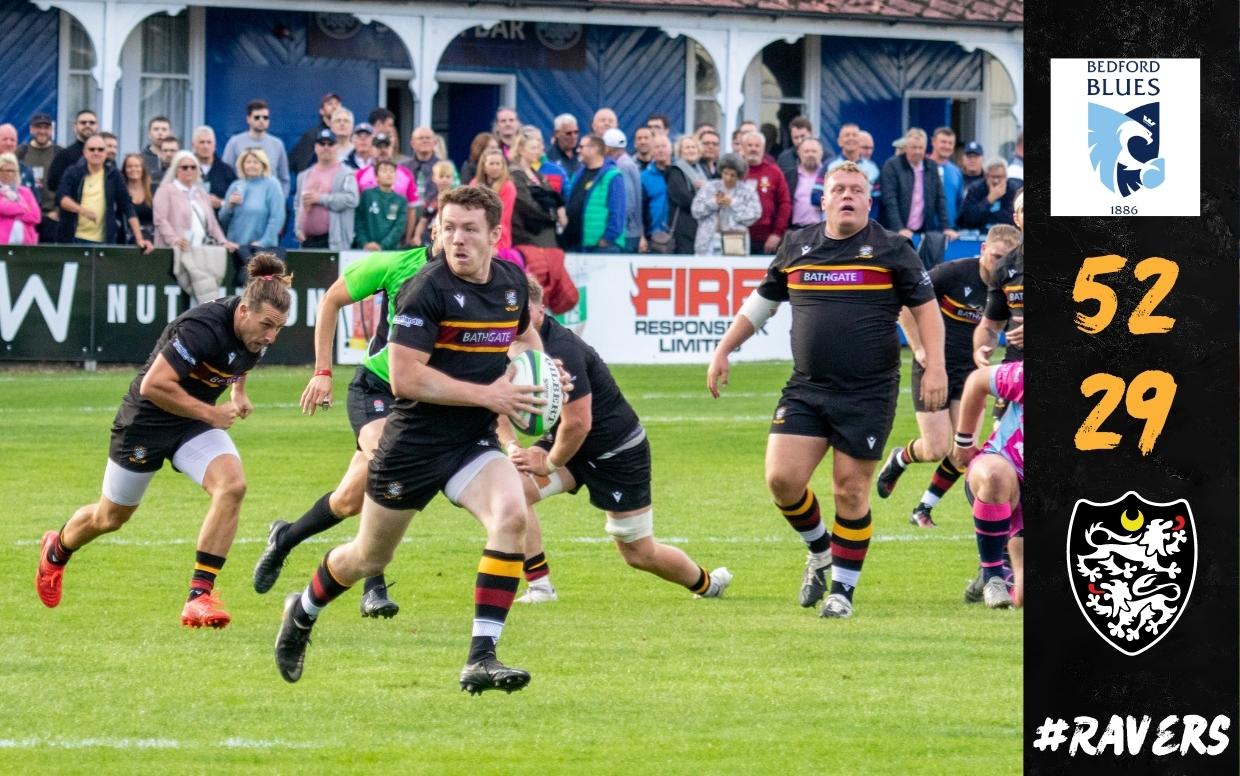 This was a chastening experience for the Ravers but an altogether more effective second half together with their determination to play for the full 80 minutes did at least ensure they returned to the Wirral with a 4 try bonus point.

An immaculate pitch, a sunny day with a gentle breeze, and a decent crowd of 2,500, it was all perfectly set up for champagne rugby and the Bedford Blues provided it. Bedford just don’t do set piece arm wrestling. Quick throw ins, quick recycling, quick switches, quick everything! Their speed of thought and movement simply overwhelmed the Ravers in a first half blitzkrieg of six tries run in from all parts of the pitch. Engineering overlaps and space was effortless for the home side but made that much easier by the numerous yellow cards which depleted Caldy’s numbers.

Caldy had responded to the 2nd minute score by Bedford with an early 8th minute try through the pack by Adam Aigbokhae. The Ravers should have had another moments later when the Caldy maul was pulled down illegally feet from the line. However, referee Simon Harding judged a yellow card against the Blues and a penalty for Caldy was sufficient punishment. Caldy’s line out drive was legally halted and eventually the attack fizzled out after an infringement. 15 minutes in and the momentum was now firmly with the pink shirted Blues.

A half time score of 38-5 was a fair reflection of the home side’s superiority.

Caldy needed a change up in the second half if they were not to be on the receiving end of a cricket score. Fresh legs and a determination to take the game to Bedford enabled Caldy to gain some respectability in an altogether more even second half.

Sniping runs from Nye Thomas, a 40-metre breakout by Nick Royle and attacks from deep galvanised the Ravers. More invention from Dan Bibby and Ezra Hinchcliffe, repeatedly had the home side scrambling. The Ravers were starting to play some rugby. 4 second half tries from Ollie Hearn, JJ Dickinson, Martin Gerrard, and Nick Royle versus two further scores by the Blues fairly reflected the tactical changes implemented at the break.

Caldy’s running game was just so much more effective than their kicking game and it was a joy to watch. When the bonus point came in the 73d minute with a try from Martin Gerrard there was applause all-round for a spirited fight back from the Championship newcomers.

A happy ending was achieved as Caldy’s backs and forwards combined in a flowing move that resulted in a try in the corner. Although scored by the evergreen Nick Royle, it was the sumptuous final offload by the giant Tom Sanders that even the partisan home crowd applauded.

Tickets for this game at Paton Field with a 3 pm kick off may be bought online at £10 for each adult here:

https://caldyrugbyclub.com/buy-tickets/  Tickets bought at the gate are £15 per adult