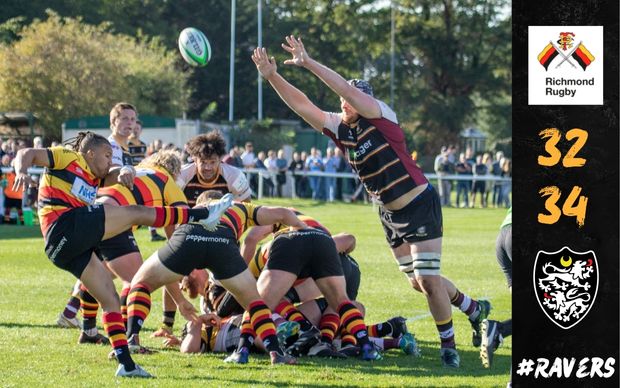 26-3 down after 25 minutes and the small band of travelling Caldy supporters were preparing themselves for a less than exuberant trip back to the Wirral. Caldy weren’t playing badly, they had started the better and had the edge up front but Richmond were just ruthlessly clinical.

Three mistakes by Caldy had led to three tries from Richmond all based on simple well executed rugby. Turnovers and fast ball transfer combined with excellent decision making by the Richmond centres Paul Kiernan and Paddy Case provided overlaps galore which the home side didn’t squander.

Caldy had to find a response and it had to come quickly if Caldy were to take anything out of the game. On the 35-minute mark a brilliant turnover by Sam Dickinson led to a catch and drive score by the barnstorming Harrison Crowe. There was a chance.

Defending their 5-metre line didn’t look like a promising attacking position for the Ravers but when Nick Royle snaffles a loose ball anything can happen, and it did. The veteran flyer didn’t contemplate kicking. If he could somehow deal with 5 would be Richmond tacklers, he was going the length of the pitch to score. It was brilliantly audacious but highly improbable. He fended, handed off, stepped out of tackles, and finally out sprinted all the Richmond defenders to score ninety-five metres away from the point from where he had set off.

It was the finest individual score most will ever have seen at any level. It sucked all the air out of Richmond’s 30-minute bubble and inflated Caldy’s confidence. 26-15 at the break and it was all to play for.

Richmond’s early scores had been orchestrated by the excellent play from their midfield, but for some reason they switched their second half tactics to focus their efforts through their juggernaut pack. Although the 6ft 11-inch behemoth Will Carrick Smith was often making a mess of Caldy’s line out, Caldy’s forwards had the ascendancy in all other facets. Hard carrying from Harrison Crowe, Tom Sanders, Sam Dickinson, and Adam Aigbokhae was sapping the home side and with Chris Pilgrim and Ezra Hinchcliffe expertly controlling play, Caldy maintained both their momentum and their stranglehold on possession and territory. 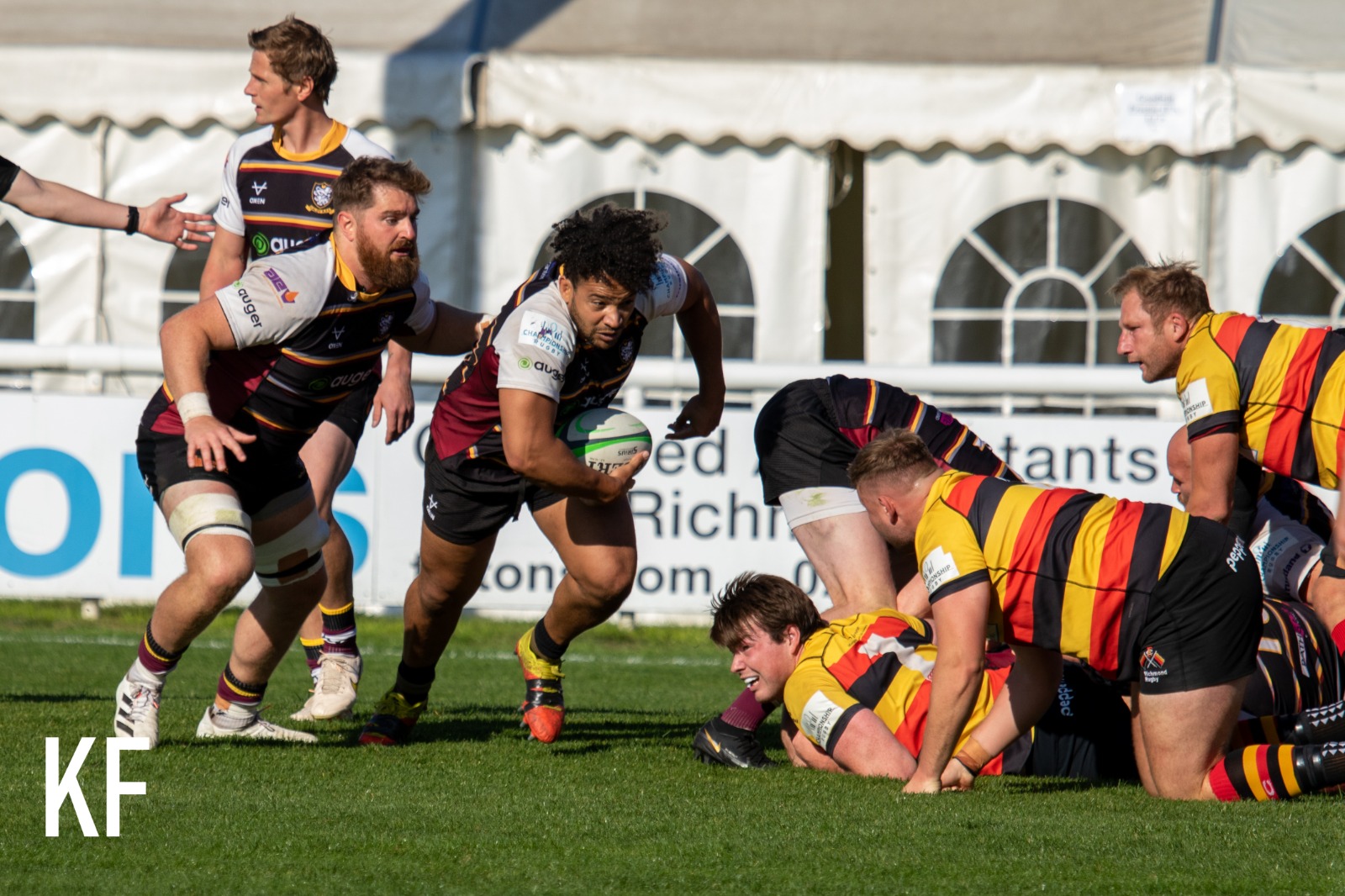 Two quick scores in the first 10 minutes from Sam Dickinson and JJ Dickinson took the visitors into the lead 26-29 and secured a four try bonus point. The Caldy forwards now looked the fitter and more obviously dominant and an element of panic crept into Richmond’s hurried and disjointed play. Although Richmond struck back with a couple of well taken penalty kicks to regain the lead 32-29, Caldy’s pack never relinquished their control. The home side were imprisoned in their own half and try as they might they just couldn’t break free from Caldy’s shackles.

Replacement scrum half Joe Murray picked up from where Pilgrim had left off. Racking up the pressure through the forwards would surely manufacture another final scoring chance for the Ravers. It did, the chance falling to replacement second row Martin Gerrard who charged down an attempted relieving kick by Richmond and nimbly followed up the bouncing ball for a well taken score in the corner. 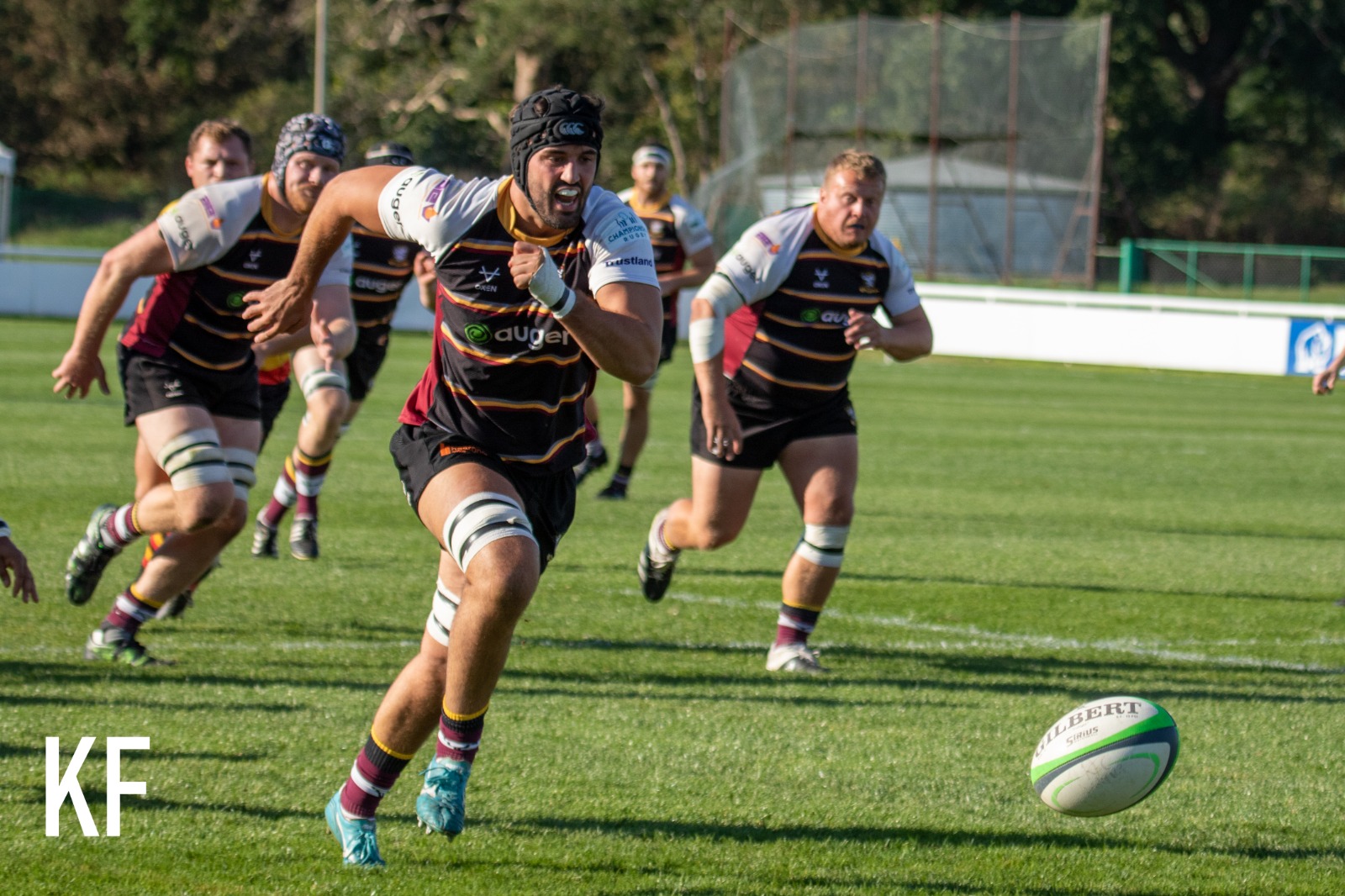 Caldy 32-34 ahead and a disciplined last 8 minutes set up their first ever Championship win.

The Rugby Paper gave the Man of the Match to Caldy captain JJ Dickinson, but this was a real team performance full of grit, bloody mindedness, smart tactical play, and 12 seconds of staggering individual brilliance.

In the vernacular of the under 40’s it was just the ‘sickest’ of coach journeys back to the Wirral.