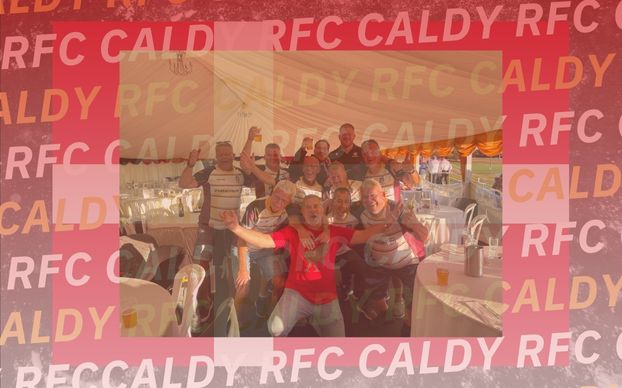 Caldy’s first match in the Championship, a home fixture against Hartpury, was memorable for the club and its supporters, including a small band of new Ravers fans. There was so much to like about the day, opponents who came to play rugby, the best weather you could hope for, and a decent enough crowd of circa 1,300.

Among the crowd were ten football fans from the Kastrup Boldklub football club from Copenhagen in Denmark who had inadvertently found their way to Paton Field. These Danish football supporters had each paid £1,000 to come to Liverpool via Copenhagen and London to watch Saturday’s Liverpool v Wolves fixture at Anfield.

The Queen’s death had of course resulted in the cancellation of all football fixtures on Saturday 10th September which these far travelling football supporters were only informed about late on Friday after a 6-hour bus trip from Heathrow. Determined to watch some live sport they swapped Premiership football for Championship rugby and switched ‘stadiums’ exchanging Anfield for Paton Field.

Arriving at Paton Field an hour or so before kick-off gave the intrepid Danes plenty of time to enjoy Caldy’s hospitality and learn a little bit about what on earth was going to unfold in front of them.

Despite knowing absolutely nothing about rugby or rugby culture their trip was made memorable when Caldy arranged for a couple of Caldy supporters to buy them some beers and take a few photos of them enjoying the Paton Field experience.

Caldy supporters Robbie Fowler and Neil Mellor certainly lifted the spirits of these Danish football supporters (most of whom were passionate LFC supporters) and with Caldy shirts and the signed match ball to accompany the selfies with their LFC heroes, they were given a huge boost by the Caldy experience and their day at Paton Field.

“The welcome we received from Caldy was just unbelievable, we are all now ‘Ravers’ fans and we are setting up a Caldy Supporters Club in Kastrup, Copenhagen. We travel abroad every two years to watch club football at the great clubs in Brazil, Spain, and this year it was meant to be Liverpool and Anfield. Instead, we had just an amazing experience at Paton Field and just a stunning day with Caldy RFC. We are all coming back later in the season.”

Caldy’s Operations Manager Bob Cooke was pleased that Caldy was able to give their new Danish fans such a wonderful day. “The lads had saved up for two years to go to Anfield and although they completely understood the circumstances, it still must have been a huge disappointment for them. All credit to Robbie and Neil for giving these lads such a fillip and for everyone else at Caldy for making them so welcome”

Our dear departed Queen would surely have approved.