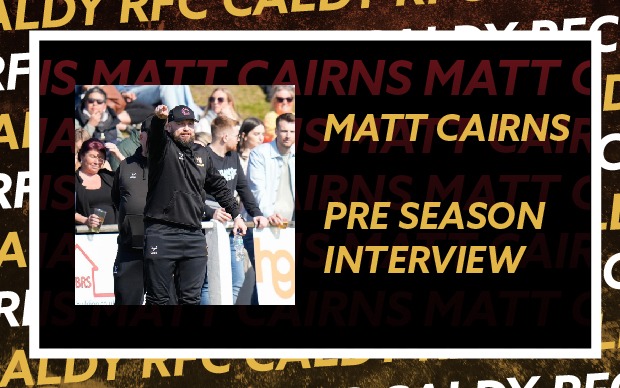 Firstly, congratulations on the promotion, Caldy playing Championship rugby for the first time in their history, what is the buzz like in the club at the minute?

I think everyone is pretty excited, but at the same time, there have been lots of things the club has had to comply with to get the ground and facilities sorted. We are nearly there now, and there has been a lot of hard work done behind the scenes to get that sorted. The players have been training hard but we have a few more weeks to get the lads ready for the first game.

We have 5 pre-season games in the next 4 weeks starting this Friday night against RGC. What can we expect to see from the team and our opposition? It is always a good test against the North Wales outfit.

Pre-season is just a case of getting the lads’ game ready. Our first hit out this week at RGC will be a whole squad game with around 40 lads involved in different combinations. RGC will be strong as always, and I’m sure it will be a good run-out for the squad.

We then have Sale Sharks the following Friday night, how has that matchup come about? A brilliant fixture to hold at Paton field against the Premiership giants.

It’s great to get Sale Sharks down to the club, and it will be a great occasion. I’m hoping the jump in standard will be good for the lads to give them an idea of where we are and what we still have to improve to be where we need to be. It’s fantastic for the team to have the opportunity to play a premiership team and great for our supporters to have them at Caldy.

We have two games midweek, Birkenhead Park on the 18th and Winnington Park on the 26th August. With games against Sale Sharks and Sale FC the day after both respectively, can we expect to see some of the younger/ new lads getting minutes in those fixtures?

We are hoping that everyone in the squad will get some time in pre-season, but we have some new faces that need to get to know the lads on the pitch, which will take time. At this stage that’s what we will use those games for as well as getting some time to the younger lads and giving them an opportunity to play.

We haven’t seen a plethora of signings from Caldy this summer, other than the addition of Dan Bibby and Louis Beer. Can we expect to see a few more players come in before 10th September and Hartpury (H)?

The plan was never to overhaul the team, and we haven’t done that. We do have a few more players that are training with the squad, and when the time is right, I’m sure they will be announced as signings. We are really happy with the squad so far and excited to see what everyone can do.

On the new signings, how have Dan and Louis fitted into the squad?

Both have fitted in well. In particular, Dan brings a load of experience with him which has been great. He did train with us last summer also, so he knows all the lads, which really helps!