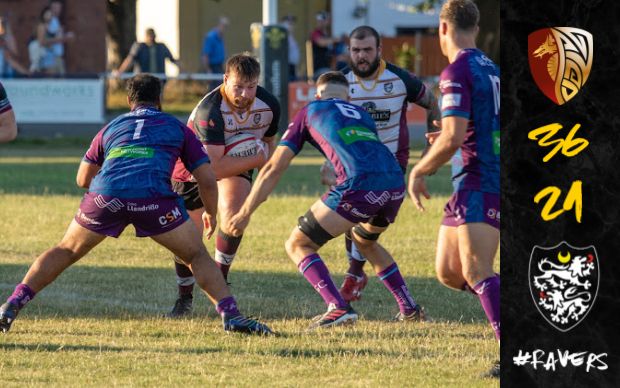 Caldy travelled in a sub-Mediterranean climate to North Wales development side, RGC, for their first pre-season outing as a newly promoted Championship side. It was the first chance for head coach Matt Cairns and Assistant Richard Vasey to field 45 players throughout the 80 minutes, an opportunity not to be missed.

The game started in a typical cross-border fashion, with physicality in attack and defence by both teams. RGC started the better and with good link-up play between fly half Dion Jones and prop Jessie Williams left Rhodri King unmarked to canter over in the left corner.
This sparked a response from the Ravers, who slowly got into the game through attacking kicks from Ezra Hinchliffe and Rhys Hayes. The response didn’t stop there when Sam Dickinson put a big shot in midfield to halt the oncoming RGC prop. Rumour has it; he’s made of granite.

Two quick tries from Caldy took them into a 5-14 lead after 20 minutes. The first came from an unstoppable rolling maul which ended with Sam Dickinson touching down. The second from a well-worked set piece which set new signing, Dan Bibby through a gaping hole between the two RGC centres.

Caldy made 15 changes with the opportunity to blood new signings along with other 1st and 2nd team players. The second 30 minutes started in similar fashion. RGC started the better when Afon Bagshaw raced away straight from the restart. 2 minutes later, rinse, repeat. A kick deep into RGC territory was fielded and Afon was set loose down the left hand side to sprint in from 50 metres.
Two quickfire yellows for cynical fouls by Afon and Delwyn Jones from RGC gave Caldy the numerical advantage which they exploited minutes later when Tom Fletcher bust through two would-be tacklers to offload to Ben Jones to score and convert his own try. Game on.
Unfortunately, there was an immediate response from RGC who replied by scoring rolling maul before the end of the second 30.

Caldy made 15 changes.
RGC started from the restart again in a similar fashion, which was to be expected now. A rolling maul try and a cheeky back peel Lineout play sent Jordan Scott over from 5 yards to round off a good RGC win.

Richard Vasey was happy with the performance and the opportunity to field so many players:

“It was a good first hit out, loads of positives to take away from the game. Great opportunity to see the new lads – Dan Bibby, Chris, Will etc who all performed well in the opening 30 minutes. Also, really good opportunity for our wider squad members to experience match intensity against a Welsh premiership side.”

We look forward to welcoming Sale Sharks to Paton Field this Friday. 6.30PM Kick Off. Get your tickets here: