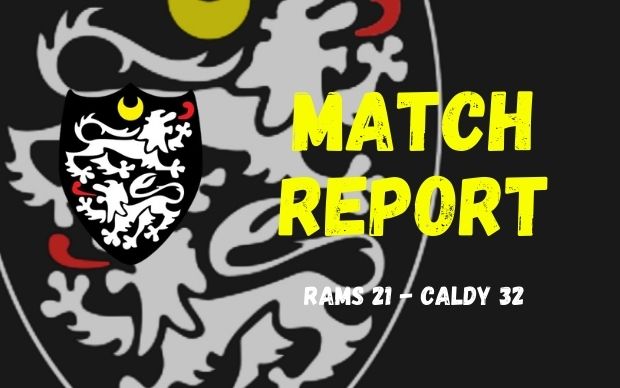 A 6-hour coach journey is not the best preparation for a game of rugby in National 1. However, with a combination of the Easter traffic and 100,000 Liverpool and Manchester City fans heading to Wembley for the semi final of the FA Cup this was what was required as Caldy’s travel and logistics co-ordinator Graham Armitage explained.

“We had a 6.30 start from Paton Field to try and get ahead of the traffic and by and large it was successful but of course it was not ideal. Unfortunately, we did get tangled up with some Manchester City fans at the motorway services. Not the ideal preparation for a league game”

Despite the prolonged travel, it was Caldy that took early control against fifth placed Rams with an opportunistic dart by scrum half Nye Thomas after some heavy carries and drives from the Caldy pack had set up the scoring opportunity. When moments later Ollie Hearn went over after a lineout drive, Caldy looked to be in complete control, but it was illusory. London Irish loanee Caolan Englefield stepped and dummied his way to the Caldy 22 before putting in another London Irish loanee Michael Dykes in at the corner.7-14 at the break.

A Ben Jones penalty shortly after the break re-established Caldy’s two score advantage but there was no real distance between the sides and when the home pack were illegally stopped near the Caldy line a penalty try and a yellow card for the giant Tom Sanders was the outcome. 14-17 and a man advantage flooded Rams with the belief they could topple the league leaders.

Caldy responded as they have done for most of this season. A well worked score by JJ Dickinson kept the Wirral side ahead and although Rams brought the score back to 21-24, another penalty from Ben Jones and the bonus point try by the evergreen Nick Royle closed out the game in Caldy’s favour.

Even though Caldy were not at their best this was a good win on the road against determined opponents to set up the final game of the season at home against Sale FC.

It is likely to be slightly busier than usual at Paton Field so arriving earlier could be advantageous.