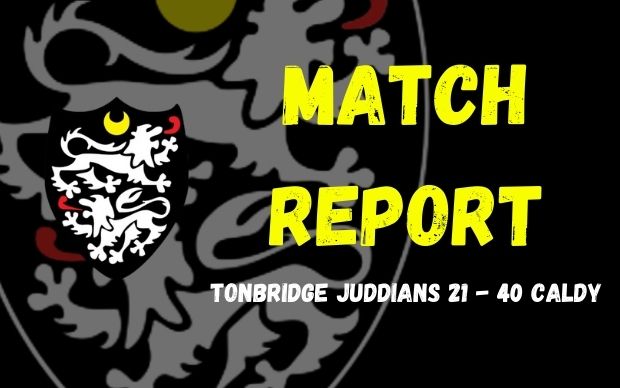 This contest at the very hospitable Tonbridge Juddians club in Kent ended up with Caldy doing enough to win without the intensity of recent weeks. After a succession of very difficult fixtures, it was perhaps understandable that Caldy were not quite on top form, but they did intermittently show flashes of their best rugby as they notched up 6 tries, but the moment Caldy dropped their levels TJs pounced scoring three tries of their own.

On a firm pitch in Spring like conditions, Caldy started the scoring after a 40-metre midfield break by JJ Dickinson put in Dave Jones for a try under the posts. Caldy were up and running. Caldy’s second score was the try of the day. 20+ phases of complete rugby showed the Wirral side at their best with centre Lucas Titherington grabbing his first of two tries. When the evergreen Nick Royle picked up a difficult pass from knee height to scoot over for Caldy’s third of the day after only 20 minutes it looked as though this could be one way traffic.

However, this 300th national league try by the National League’s all-time record try scorer jolted Tonbridge Juddians into life. Two tries from the hosts made a contest of it and Caldy were made to work for their bonus point win. Further scores by Elliot Gourlay, Lucas Titherington and the excellent Ben Jones finally seeing Caldy home by 40 points to 21.

Caldy did what they needed to without being quite at their normal standards but despite this there were some eye-catching performances. Captain JJ Dickinson relished the fast track and carried with pace. Dave Jones brought aggression and intensity to an unfamiliar stint in the second row and at outside centre Mike Cartmill gave an assured performance.

The Rugby Paper gave its star man rating to JJ Dickinson, but he must have been run very close by Ben Jones who produced another first-class performance from the tee and around the pitch. The Ravers’ quiz master, tiffin baker and music maker is now 32 points clear at the top of the National 1 scoring charts.

This Saturday 5th March Plymouth Albion visit Paton Field. Albion who are one the big clubs in National 1 find themselves in an unfamiliar position towards the bottom of the table and will be keen to avenge their earlier home defeat by Caldy and pick up some points on the road to move towards mid table safety.

The match reverts to a 3 pm kick off time and Caldy will need a large and vociferous home support to fire up their Spring campaign at the business end of the National 1 league season.