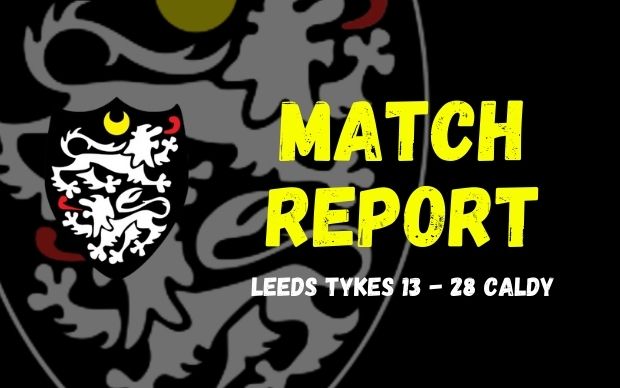 This compelling match was hard fought for the full 80 minutes and the Ravers were delighted to leave the Sycamores with the bonus point win.

The talented and committed young Leeds Tykes side gave everything but, in the end, Caldy had just too much heft and experience for the home side.

Playing with the benefit of a stiff breeze, which was probably worth 10-15 points, Caldy turned around at the break only 11-3 ahead. Would it be enough of a lead against a fit Leeds that were renowned for the strength of their second half performances? Other than a well taken try and a couple of penalties, all from the ‘imperious’ winger Ben Jones, the Wirral side had been well marshalled by Leeds who had shaded possession and territory. Before the break Caldy had kept the dangerous Tykes’ runners quiet but there seemed no way through the home side’s defensive wall.

In the second half Caldy changed tactics. Gone was the width and the miss passes which had characterised Caldy’s earlier play and in its place Caldy rolled out a brutally effective route one approach. The Loiners appeared to have little answer to Caldy’s physicality and directness. Heavy carrying by all the pack, with Sam Dickinson, Harrison Crowe, and Martin Gerrard to the fore, sapped the energy and the resistance from the home side. But it was the home side that scored next. A speculative kick into the in-goal area was covered by Mike Barlow but as he finally touched the ball down the Leeds replacement Will Hardwick pounced to claim a score. The officials conferred for a couple of minutes and eventually agreed with the jubilant home side that a try had been scored. An 8-11 score line albeit in Caldy’s favour didn’t look promising for the visitors playing into a very stiff breeze.

Eventually however, the constant forward drives in open play and Caldy’s dominant scrum and excellent lineout became the platform for two well-constructed tries for Joe Murray and the indefatigable Adam Aigbokhae to put Caldy more than two scores ahead.

Having to use all 5 substitutes as injury replacements had clearly upset the rhythm of the depleted Tykes and although the clock was ticking Caldy sensed there was an opportunity to score a bonus point try. The try came in the 79th minute after another forward drive gave Caldy field position enabling the Wirral side to bring the National League’s all-time record try scorer Nick Royle into play. The evergreen speedster had no space to work with and two or three defenders to beat but footwork, strength, and determination secured the bonus point try.

As a fitting consolation for an admirable Leeds Tykes side, winger Harry Jukes expertly caught the restart kick and raced to the corner to make the final score Leeds Tykes 13 Caldy 28.

This was a wholehearted battling performance from a Caldy side which changed its game plan to suit the match circumstances. The travelling Caldy supporters, boosted by 5 coach loads of Mini-Ravers together with their Hawaiian shirted parents, gave Sam Dickinson a deserved Man of the Match accolade. This well executed squad performance owed a lot to the tactical nous of coaches Matt Cairns and Richard Vasey who backed up their 100% success rate in Ben Jones’ Leeds themed quiz on the way to the match with another smart call during the game.

Along with most other National 1 sides Caldy has no game next week but will return to Paton Field on 26th March for a home game against the redoubtable Taunton Titans.

Caldy’s Director of Rugby Gareth Davies will be hoping for a large vocal home support to encourage the team in the 3 remaining home fixtures beginning with Taunton on 26th March.