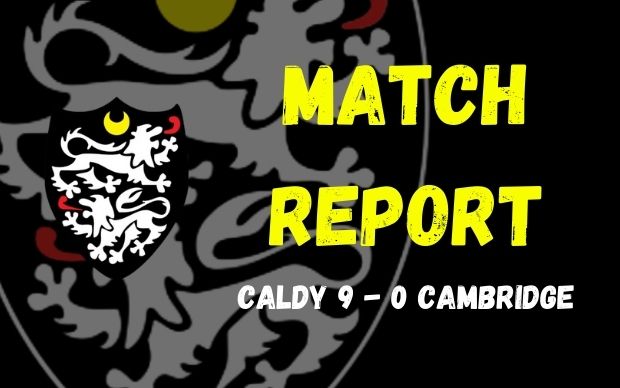 After the reverse fixture earlier in the season ended in a draw, a close result was expected at Paton Field. It lived up to the pre-match predictions. In a physical hard-fought encounter, Caldy won the tightest of matches 9 – 0 courtesy of three Ben Jones penalties.

“Conditions were heavy and we adjusted our game plan to suit. It was a first-class all-round defensive effort against an exceptionally good side. We kicked our penalties when we had the opportunity to do so which enabled us to come out on the right side of the score line.”

The result keeps the Wirral side in second place in the table and inches them closer to leaders Rosslyn Park, but Cairns refused to be drawn on Caldy’s prospects for the rest of the season. “There are eight games still to be played against eight very good sides and after those games are over, we will tot up the points and see where we are then.”

In the first half, a series of shuddering tackles by Caldy’s tighthead prop Nathan Rushton and flanker Harrison Crowe drew gasps from the home supporters and typified Caldy’s defensive effort. Try as they might the ‘Blood and Sand’ just couldn’t breakthrough.

The second half was a repeat of the first half with neither side being able to cross the line. The closest either side came was through a Nick Royle chip and chase which would have surely resulted in a score for the home side if the ball hadn’t got stuck in the mud.

For most of the 80 minutes, Cambridge dominated possession but rarely broke through Caldy’s defensive cordon. The visitors’ tactics were clear, dominate the line out and when in range drive to the line with the pack. The visitors had three or four kickable penalties but, on each occasion, opted for the kick to the corner. On another day and against another team it might have worked, but not against Caldy.

This was the difference between the sides.