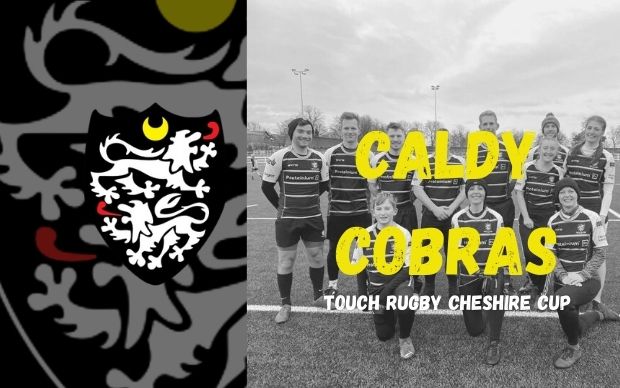 The Caldy Cobras travelled to Lymm on Saturday to compete in the inaugural Touch Cheshire Cup involving teams from Chester, Crewe & Nantwich, Lymm and Warrington.

We were given a rousing reception with horrendous weather. All the excitement of the event seemed to distract the Cobras as they let the Crewe & Nantwich Infernos (C&N 2nd team) run away with an early lead. The Cobras stung back at the end but still suffered a narrow defeat 5-4. The confidence ran into the 2nd game as Caldy best Warrington Knights 5-4; it was the flair and skill of Dillon and Windell that stood us in good stead.

The 3rd game saw the Cobras against a rather familiar looking Crewe & Nantwich Blaze team, with a few of the better players looking familiar from the game against the Infernos. From the early seconds of the game, the Cobras were rattled and we ultimately got trounced 8-1. It felt like a biased affair in which the only highlight was a tremendous diving try from Thomas.

The Cobras had to bite back in the 4th game against Lymm. Redfearn and Gerrard brought their direct running into effect and by this time the team had developed a strong defensive discipline and the trademark quick strike in the turnover began to produce some mind-blowing tries, leading to a 4-1 win. It was the final game against the Chester Cheetahs that gave the team the biggest boost. The Cheetahs are our local rivals who certainly have strength in depth and some cracking players. In fact, we had to use some ringers from the Cheetahs due to our depleted side. It was the terrific Rainer who marshalled the inexperienced substitutes all day and it was this defensive stability that helped the team build some fabulous scores.

Ultimately the challenge of Chester saw some of our most balanced Touch as we saw some sweet hammer, sweeper and aussie moves, they certainly helped the Cobras hold the Cheetahs level 3-3. It was just a shame to have 2 tries disallowed due to the narrowest of touches but we managed to put the wingers in with tries which was no mean feat in the blustery day. It is worth mentioning the hard work Clark and Hansen did with solid defensive displays and some great link up play with their respective link/mids.

All in all a great start to the day that left the Cobras in a positive mood which surely helped rubbed off on the 2nd XV who won later in the day on the same pitch.

The Cobras next tournament the Liverpool City Region Touch League on the evening of Friday 18th February at home. The team would love to have support, particularly at the bar after the game.

Everyday is a learning day!