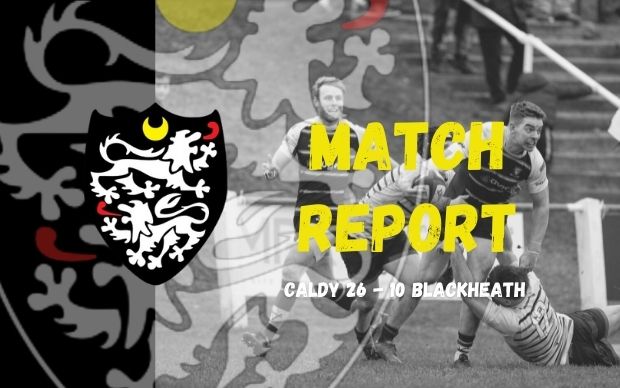 Caldy’s Director of Rugby, Gareth Davies was pleased with his side’s 6th successive victory after a tough encounter against Blackheath keeps them second in the table.

“We have been here before. In 2018 we were in first place after 10 or 11 games and then we only picked up a couple more wins during the rest of the season and were relegated. This is a very tough league and injuries can play a big part but on the flip side, our strength in depth through our outstanding 2nd XV makes us much better prepared this time around. We will continue to enjoy our rugby regardless of where we are at the end of April.

Caldy won this hard-fought slog of a match by three tries to two through their superior defence and a couple of moments of invention.

Blackheath started the brighter completely monopolising possession for the first quarter, but their attacks were blunted by determined and at times ferocious Caldy defence led by the outstanding Harrison Crowe. With plenty of ball but little penetration, Blackheath looked devoid of ideas until eventually, a well worked move put winger Nicholas Foster in at the corner to give the London side a 5-0 lead.

Caldy went ahead courtesy of a brace of penalties by Ben Jones which sandwiched a try for prop Adam Aigbokahe from a driven lineout. Caldy were in front, but it wasn’t the free-flowing rugby their supporters hoped to see.

Early in the second half Caldy produced the best bit of rugby in the game with backs and forwards interlinking to eventually send full back Elliott Gourlay in at the corner. But it was still very tight. Blackheath winger Jake Lloyd touched down after he won his chip and chase to close the gap to 16-10

It remained tense until a monster of a penalty kick from the ever-reliable Jones relaxed the home supporters who were then treated to a cheeky front of the lineout play which enabled the excellent Callum Ridgway to race to the line for a try converted by Jones.

Next week Caldy travel to play Darlington Mowden Park in their cavernous 26,000 all seater stadium.