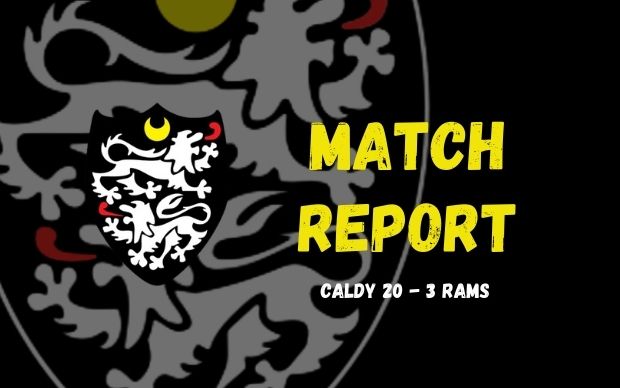 Caldy beat Rams to move to up to fourth place in National 1 and continued their impressive run with one defeat in the last eleven games.

Going into the game, the two sides were separated by two points and one place in the league, with the visitors from Berkshire naming four debutants in their matchday squad.

The defences were on top in the first half, with both sides unable to break through. The teams were reduced to one penalty kick each in the opening half.

The home side were more attacking after the break, with the visitors finding it difficult to get over the halfway line.

Caldy were unlucky not to take the lead ten minutes into the second half with a great run from Ezra Hinchcliffe down the wing and the ball got to Jack Parker who was unfortunate not to ground in the corner.

Caldy kept up the pressure, reducing Rams to playing a long ball game and Caldy’s strong pack was key in them winning the majority of the scrums to the frustration of the visitor’s bench and a small band of supporters who’d made the 7 hour round trip to the Wirral.

Parker eventually got his name on the scoresheet just before the hour mark, after a great passage of play five meters from the visitor’s line with the conversion giving Caldy a lead they wouldn’t relinquish.

The home side continued to pressure the Rams defence in the final quarter and they were rewarded when lock Tom Sanders managed to get the ball down after great pressure on the visitors line. Ben Jones’ conversion completed a deserved and hard fought victory for Caldy.

Caldy travel to Greater Manchester next Saturday to play their last match of the year against second place Sale FC at Heywood Road  with kick off at 2pm.

The next match at Paton Field is a charity match between Caldy Old Boys and a Caldy under 25s team on Boxing Day with kick off at 1pm.  All proceeds go to Claire House.