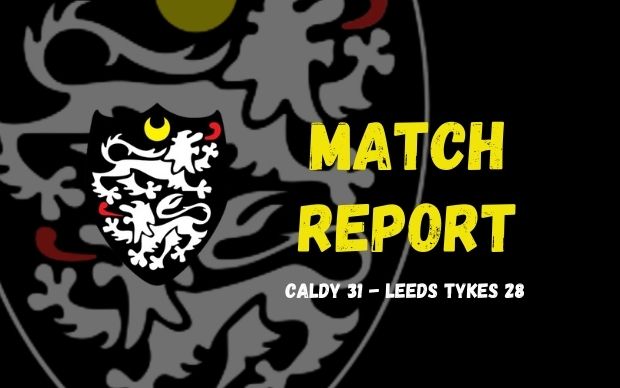 A thrilling see-saw game was edged by Caldy but only after they were given a real scare by an entertaining and adventurous Leeds Tykes side. With the previous week fallow for Caldy it was always likely that a little light rust might appear but no one expected complete corrosion, not least an expectant crowd including a number of local rugby luminaries. But that was how it appeared in the first 10 minutes of this entertaining encounter.

Caldy just hadn’t switched on and the visitors took full advantage. Playing with verve and panache the Yorkshire side attacked from every position and within minutes the visitors were two tries ahead. Scintillating flowing play by their backs was finished by the extreme pace of fullback Andrew Lawson. Lawson’s first was fashioned from a set play which worked like clockwork to introduce the full-back into the attacking Tykes line and was finished in the corner. The second was a solo effort from within the Tykes 22 metre area which was aided and abetted by some weak Caldy defence.

Caldy needed to fashion a response quickly, and after some explosive play by Sam Dickinson and Adam Aigbokhae, giant second row Tom Sanders galloped through the middle of the Leeds defence to record Caldy’s first try converted by Ben Jones. Caldy were into the game and despite Leeds’ continuous and enterprising wide play it was the home side who scored next through a driven line out to put JJ Dickinson in at the corner.

Caldy were ahead 14-10 but they were far from being in control. The Tykes continued with their expansive game and only sound if scrambled Caldy defence kept them out. Just before the break the 14-10 home advantage was reduced to a single point after a penalty score by Leeds

If Caldy were going to prevail it was clear that in the second half they had to control possession better and take advantage of their forward power. As the second 40 got underway Caldy were noticeably more direct through their pack but nevertheless the visitors briefly re-took the lead through a try by Tykes flanker Dafydd Lloyd until Caldy prop Jack Parker smashed his way over the line to restore the home advantage. 19-18 to Caldy but it was precarious

The introduction of Nick Royle on the 50-minute mark swung the game Caldy’s way. First the speedster scorched past a despairing Lawson to stretch the home lead to eight points, and when Lawson countered with his hat trick try to bring the Tykes back to only a 3-point deficit, Royle struck again to make the game safe.

A lapse of concentration at the start of the first half had cost Caldy 10 points and a similar lapse in the last minute presented Leeds with a try for winger Harry Jukes and allowed Leeds Tykes to leave the Wirral with a losing bonus point to accompany their 4 try bonus point. Caldy will be relieved to have won a game which at one stage looked likely to get away from them. A young Leeds Tykes side wowed Paton Field with their brand of attacking, high tempo rugby and on this display they fully deserve to progress up the table.

This was an exciting and enthralling match which as one Caldy stalwart observed had provided huge entertainment value for his £10 entrance fee.