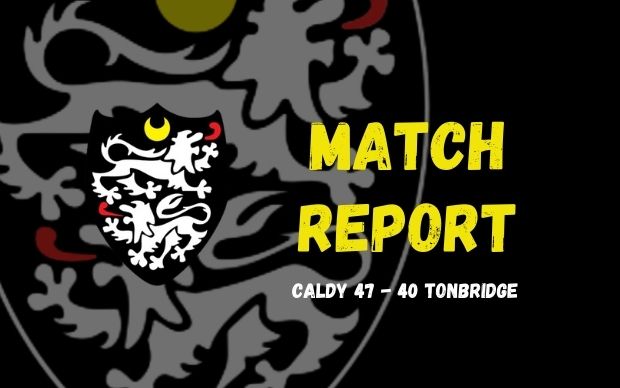 Tonbridge were enjoying their day at Paton Field until just the 5th minute when Caldy produced what turned into a plethora of tries in both the first & second half.

Backs and forwards shared the spoils with Ben Jones slotting virtually all points on offer. Caldy scored on the stroke of half time to take the score to 28-5 and secure their first bonus point of the season, to the delight of the Paton Bank.

Caldy started the second half much like how the first half ended, a second from Elliot Gourlay and tries from Nyle Davidson and Dave Jones gave the ‘Ravers’ a somewhat unassailable lead. 47-5. Caldy looking in irrepressible form and despite injuries to key players looked home and hosed.

So, with 30 minutes to play do Tonbridge throw in the towel? The answer was a resounding, no.

TJ’s responded to Caldy replacements with players who enjoyed the intensity of the following Wirral wind. Could there be a miracle comeback on the Wirral. Not quite, but too close for Caldy comfort.

Tries were a plenty, excitement all around. Half backs Matt Walsh & Tom White managed to marshal the Tonbridge team into a position beyond belief and Caldy, will look back on an outstanding performance with all the points in the bag as a job well done…. Juds about.