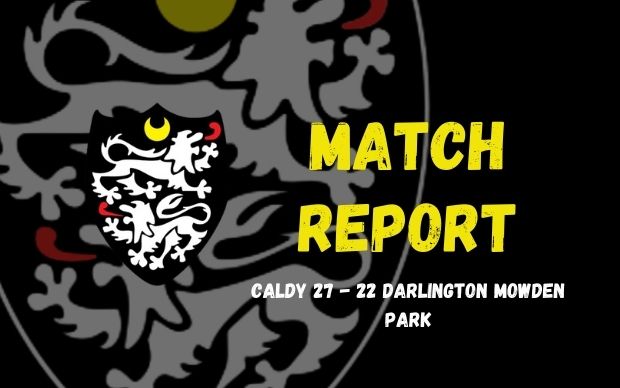 Caldy’s power against DMP’s fizz was always going to a battle of styles and as the rain lashed Paton Field it was eventually power that prevailed. Apart from a very brief period Caldy maintained a lead throughout, thanks to their muscular pack and winger Ben Jones’ kicking, but they never quite managed to fully subdue a game DMP side.

No matter which sides are playing National 1 defences are good, and mostly very good as this match amply demonstrated. Caldy had the majority of possession in the first quarter but there was no easy way through DMP. Pressure turning to penalties was the best route for Caldy.

A brace of early penalties were slotted by Jones to establish a 6-0 lead for the home side which DMP’s Warren Seals countered with 3 points but the visitors were creaking in the set piece and when Caldy’s scrum drove the Northeast side back at a rate of knots Jones restored the 6-point lead with another penalty.

A thunderous tackle which removed the powerful Adam Aigbokhae from the contest would be a huge setback for most teams but when you can summon a player as good as Nyle Davidson from the bench it helps.

However, against the run of play a break by DMP secured an attacking scrum which a Caldy infringement turned into a penalty try to give the visitors a 9-10 lead for all of a minute.  The Wirral side stormed down field immediately after the restart and all action Ollie Hearn scored in the corner to enable Caldy to go in at the break 14-10 ahead.

DMP had their chances at the start of the second half but were thwarted by their own mistakes and Caldy’s defensive pressure. Despite now playing into the wind and the heavy rain, Caldy were gaining the ascendancy and flanker Nyle Davidson crashed over for a converted score.

A DMP try from a driven line out to take the match to 21 -15 threatened a resurgence from DMP which should probably have been 21-17 if DMP’s Warren Seals hadn’t stalled his run up for the attempted conversion. As the DMP kicker moved towards the ball Caldy flier Nick Royle sprinted fully 25 metres from his line to boot the ball from the tee right from under the nose of the flabbergasted but stationary Seals.

The bizarre conversion miss deflated the visitors and another brace of penalties by Jones put the game safe for Caldy with DMP salvaging a losing bonus point courtesy of a try at the death.

This was a professional and well managed performance by Caldy who were always in control. The newly promoted side are starting to find their feet again in National 1. There will be no easy games, but it is becoming clear that Caldy have the grit, the determination, and the ability to stay in the contest.

Next week – Chinnor RFC at Paton Field. Tickets are available via the website.