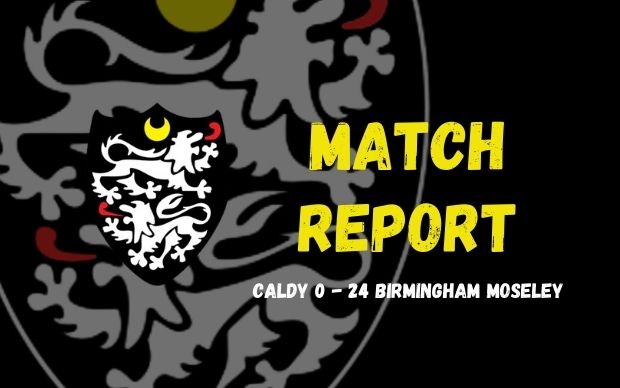 Off the pitch, it was a great day for Caldy RFC as upwards of 250 past players gathered at Paton Field to celebrate their continued connection with Caldy and reminisce with friends over memories and events, but on the pitch, the day didn’t go as well as Caldy had hoped.

Being relegated to their 2nd xv pitch to accommodate the final cricket of the season seemed to exceptionally disconcert the home side. They may not make this many mistakes throughout the whole of the rest of the season. An early Moseley try in the corner by winger Maasi Reikiti, after a Caldy mistake, set the pattern. Jack Jolly converted brilliantly from the touchline to put the visitors 7 points ahead with only 3 minutes played.

Caldy’s forwards did start to exert pressure leading to a promising period of territory and possession, but the Moseley defence was solid throughout. However, the sequence of a Caldy mistake resulting in turnover ball was repeated and powerful Moseley prop Ethan Priest crashed over in the opposite corner, again converted by Jolly, to push the visitors two converted scores ahead with only 15 minutes gone.

Further disruption for the home side arose when an injury to full back Rhys Hayes was quickly followed by an injury to live wire scrum half Nye Thomas as he was thwarted in the act of scoring. Nothing was going right for Caldy and with backrow forwards now having to fill into the back line it didn’t get any better.

The start of the second half saw the first score by the visitors courtesy of a penalty by Jolly with the third try for Moseley scored by Moseley’s powerful winger Mason Tonks coming up minutes later.

The home side had enough possession and scoring opportunities to get back into the game, but the basics let them down at crucial moments. There was no lack of effort by Caldy, with repeated thundering carries by the powerful forward trio of Sam Dickinson, Harrison Crowe and Adam Aigbokhae denting the visitors’ defence but the match stubbornly remained stuck in a Groundhog Day pattern. Each and every Caldy drive came unstuck through handling errors and other basic mistakes.

Soaking up the pressure to wait for the inevitable Caldy mistake were Moseley’s tactics now and when the error came the visitors counter attacked brilliantly. Accordingly, it was a surprise that Moseley didn’t push harder for the bonus point try but they left the Wirral with a resounding 24-0 score line in their favour.

Caldy will need to quickly attend to the basics if they are to come away with anything from their visit to Blackheath next week.

There was some comfort for Caldy supporters with the Caldy 2nd xv recording their third successive victory in the Cotton Traders Premier League with an emphatic 46-12 home win against Macclesfield 2nd xv.