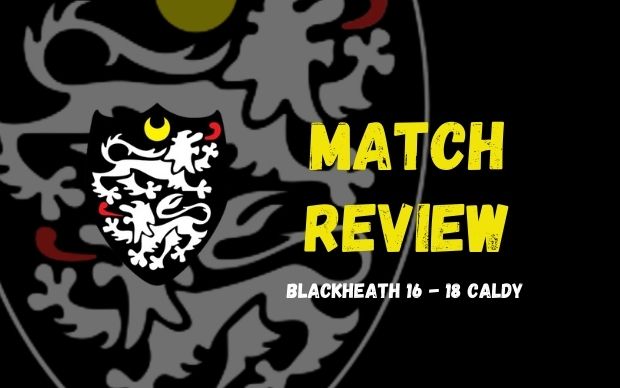 After 3 games Caldy has finally got its first National 1 league points of the season with a last-minute win over Blackheath at Well Hall and Caldy’s Director of Rugby Gareth Davies couldn’t be more delighted.

“This is our third season in National 1, but this is our first ever victory in London and after our horror show the week before at home against Moseley it couldn’t have come at a better time. We have a very honest squad of coaches and players. No one hid away from the inept display against Moseley. Everyone was embarrassed by that performance, and nothing really needed to be said by the coaching staff in the week leading up to the Blackheath match”

But of course, there was a lot said, very directly and very forcibly. No one backed away from some difficult truths and the squad’s mindset was completely different by the time they boarded the train at Lime Street for the journey to London to face Blackheath.

The giddy pre match atmosphere from the previous week was replaced by a more determined and clear focus which is a pre-requisite in National 1. Within a few minutes, a 50/22 kick by Mike Barlow gave Caldy field position on the immaculate Blackheath pitch putting the visitors in striking range. The inside centre followed up his sublime kick with an outrageous dummy which completely bamboozled the home defence allowing the centre to waltz over for Caldy’s first try after only 6 minutes.

Blackheath clawed their way back into the match and a penalty and a converted try gave the hosts a narrow 10-7 lead just before half time.

Until the final minutes scoring in the second half was restricted to a series of penalties keeping Blackheath ahead 16-13 until the 78th minute when Caldy’s second row Martin Gerrard scored the winning try from a driven lineout to ensure victory for the Wirral side.

“This performance sets the bar for the rest of the season” said Davies “Moseley was the wake-up call. We needed to be reminded just how ruthlessly competitive National 1 is. That harsh lesson was very clear and fully deserved. If we are not 100% focussed and accurate each and every week we will be comprehensively turned over, it is as simple as. “

Davies emphasised the togetherness and determination of the entire senior squad as the principal reason for the improvement in performance over the previous week.

“On the day there were some standout individual performances. The Rugby Paper and Blackheath picked out Adam Aigbokhae as the ‘Star Man’ which I wouldn’t argue with, but that performance was down to the entire senior squad. The 2nd xv has no game for two weeks, but all the guys are training, enabling us to prepare the 1st xv squad properly during the week. There are absolutely no easy games at this level. This togetherness and commitment makes the difference.”