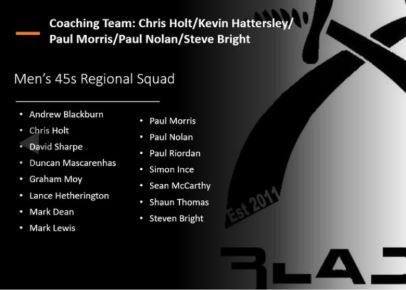 Following a very challenging time in the Touch Rugby calendar and with the easing of lockdown, regional Touch training began on the 8th May.

Players within age categories from their respective regional clubs are invited to come and train and trail for the North West Blades.

Training and selection can be tough as players are competing for a place against talented athletes from competitive clubs within our region.

The goal is to make the squad and represent the North West at the England Touch Association National Competition, against other regional teams from around England, in their respective age categories.

Within the Men’s 45s category Caldy has three players, Mark Dean, Mark Lewis and Shaun Thomas, who have been successfully chosen to represent the North West Blades and I could not be prouder as their coach and friend.

This year the two-day competition in the senior and masters categories are in Nottingham on the 14th and 15th of August. The competition is a great opportunity to play against teams who are in your age group, learn and develop and to gain experience in a step-up Touch competition.

The first day of competition is typically round-robin games to establish who goes through to knock out stages on the following day where places are contested for the finals in the plate, bowl and cup finals.

Coaches from England Touch often attend National competitions to look for upcoming and breakthrough talent that may be interested in trials for England. I will be there over this weekend along with my assistant coaches and will be cheering the Caldy and North West fellas on.

It is absolutely brilliant that Caldy Touch is starting to see more representation in the North West and the hope for next year is to see more players attending, in all age categories, in mixed, men’s and women’s teams.

Training at Caldy is on Tuesdays and Wednesdays.