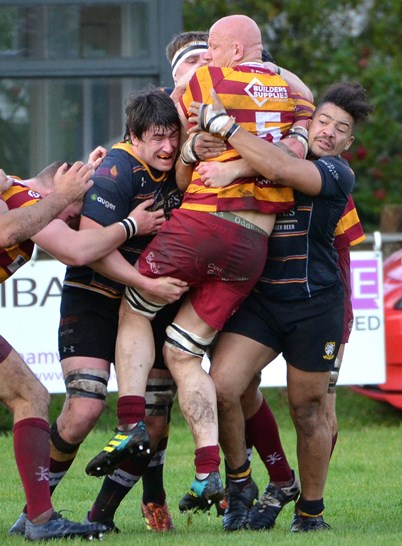 Last week’s tough encounter at Paton Field against 3rd placed Sedgley Park resulted in a 32-11 win for Caldy, but it was far from easy. At half time the sides were tied at 8-8 and a stubbornly effective Sedgley were making it hard for the league leaders. The wind and better execution gave Caldy the ascendancy in a much better second half for the home team .Caldy will be hoping to repeat that improved second half performance in their top of the table clash at the impressive Woodlands ground this weekend when they take on 2nd placed Fylde.

Caldy captain JJ Dickinson views games against Fylde as the high point in any season.

“For everyone at Caldy it has been our biggest game of the season since we first got to this level some 12 or so years ago. League position is unimportant when it comes to games against Fylde. They are huge games. Everyone is excited at Caldy. Fylde are a great side and they play a terrific brand of rugby. It is going to be an exciting contest for sure.”

Past players who are listed as some of England’s greatest ever, innovative coaches, former Presidents of the RFU and the current Chairman of World Rugby in Sir Bill Beaumont place Fylde as close to being ‘Rugby Royalty’ as it gets in the North of England.

Their status at the top of the rugby hierarchy in the North of England was dented by the advent of the professional era and for a while the club somewhat struggled to try and maintain its position in the higher echelons. The first meetings between Caldy and Fylde started in the 2007/8 season in National 2 North and the sides were well matched until in 2010 Fylde dramatically changed the landscape their fortunes with a bold and innovative move.

Persuading one of rugby’s greatest ever players Jason Robinson to come out of retirement to play at the Woodlands and also securing the services of former England coach Brian Ashton was a stunning and exciting coup that had an immediate and dramatic impact. That season Fylde cantered to the league title and for many subsequent seasons became a front runner in National 1. The visit to the famous Woodlands ground was once again one of the season’s highlights for players and supporters from the big London clubs who all admired the hospitality, the warmth of the welcome and the terrific brand of rugby Fylde play.

Fylde play the same exciting brand of attacking rugby introduced by Brian Ashton a decade ago. Their current squad is full of exciting young talent and Caldy’s Head Coach Matt Cairns knows just how formidable an opponent Fylde will be at their Woodlands home.

“We nicked the reverse fixture 25-18 at Paton Field and we know we have a massive challenge ahead of us. Fylde have some outstanding players with the pace and power to beat every team in this league. They blitzed Chester last week and we must be extremely focussed from the start. We cannot afford to be as wasteful as we were in the first half against Sedgley”

Head Coach Matt Cairns has selected the following squad for the game against Fylde which kicks off at the Woodlands at 3 p.m.