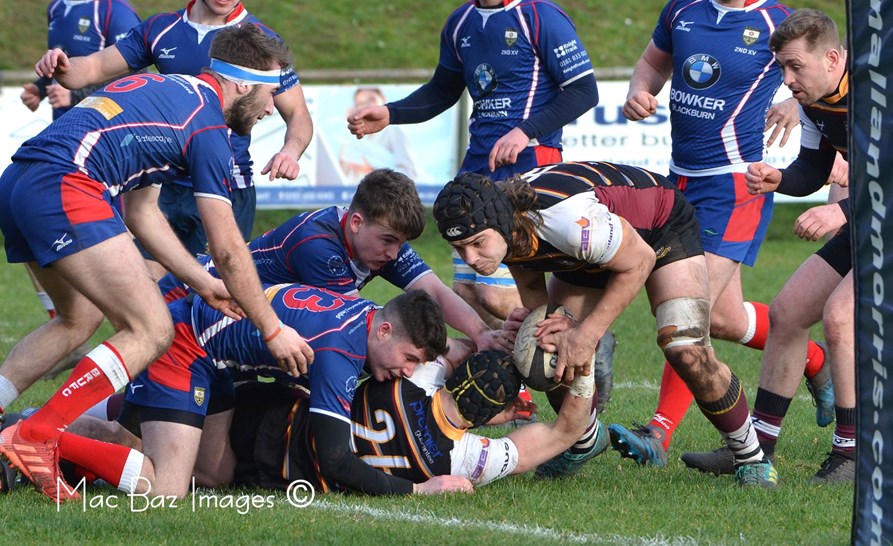 A fine display by a powerful Caldy 2nd xv saw them progress to the semi-finals of the Robinson Breweries Cup competition, and as it was a double header Caldy also recorded a bonus point victory in the Conference A competition of the Halbro North West leagues.

Despite a howling and bitter wind making conditions difficult for both sides it was an enjoyable and entertaining game. Blackburn had a reasonable share of possession but tremendous defence by the home side closed any scoring opportunities for the visitors.

Blackburn kicked off with a strong wind blowing across the pitch. Caldy attacked quickly scoring their first try after 2 mins through Tom Cornall converted by Liam Issacs. This was immediately followed by a second try scored by Matt Hooks again converted by Issacs to give Caldy an early 14-0 lead.

Unfortunately, Caldy then lost hooker Johnson Chandigere to a knee injury. Back row forward Callum Ridgway has plenty of experience as hooker, so he slotted into the front row. The next 20 mins was evenly matched but just when Blackburn might have considered they had a foothold in the game, Caldy powered away, scoring 3 further tries in a 5-minute blitz just before half time. Two of the tries were by powerful centre Tommy Banks and the third was the second of the day for speedster Cornall.

The second half started in similar vein to the first with an early try by Matt Hooks, his second of the day, converted by Issacs. The Caldy forwards then turned their dominance into points with tries from back rowers Dave Jones and Peter Weller plus a 50-metre run by giant prop Joe Sanders to score from the halfway line! All were converted by Issacs taking the final score to 59-0.

“This was one of the best performances of the season from Caldy. Our excellent defence didn’t allow Blackburn any space or time on the ball. In difficult conditions our handling and execution was clinical. Altogether it was a very good team performance with some impressive individual contributions”

Caldy’s semi-final match in the Cup will be played on Saturday 4th April away at Rossendale.