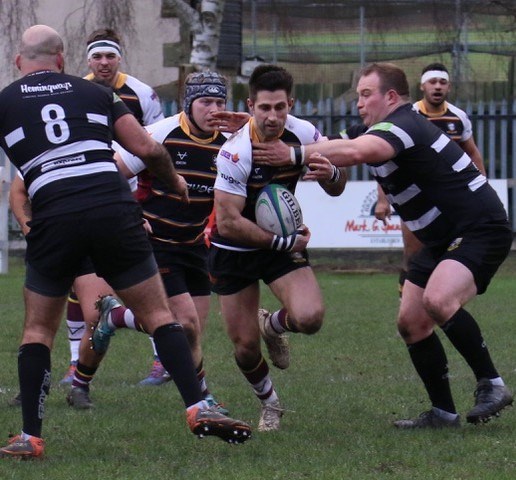 Caldy recorded their 20th win of the season at Otley’s famous Cross Green ground. As in all games in this competitive league it was a battle from start to finish. A sticky pitch and a strong numbing wind made it difficult for both players and spectators, but it was an absorbing contest.

An Otley side depleted by injuries was battling to get clear from the relegation zone, Caldy were looking to maintain their winning form. The early possession was held by the home side but Caldy are comfortable without the ball. As Otley camped in the Caldy 22 metre area and battered the Caldy wall for fully ten minutes there was optimism amongst the Cross Green supporters, but then a mistake and Caldy pounced with a length of the field move that nearly brought the first score. Seconds later a 5-metre scrum gave Caldy possession, putting winger Ben Jones over in the corner.

The pattern of the game was set. A resilient and combative Otley huffed and puffed but never looked entirely convincing or threatening. When Caldy gained possession, they were purposeful and clinical. Further tries from scrum half Jacob Ainscough and a predatory Nick Royle were countered by a slick move from the home side to provide Caldy with a 17-7 advantage at the end of the first half.

The second half continued in the same vein. A gritty and determined effort from the home side but Caldy always looking threatening when in possession. Mid-way through the half a drive from the forwards put Caldy’s captain JJ Dickinson over for the bonus point score, and straight from the restart centre Gavin Roberts waltzed his way through the home defence to effectively kill off the game with Caldy’s fifth try.

Otley may concede more points than they score but they are never ‘beaten’. With the last play of the game they picked up a consolation try to leave the final score 12-31 in favour of Caldy.

The difficult conditions were always going to play a part in this contest but there was much to admire about Caldy’s play. Up front there were strong performances all-round, with strong carrying by Harrison Crowe and Martin Gerrard particularly prominent. Caldy’s effervescent Lewis Barker orchestrated his clinical back line with purpose and direction and when the opportunities presented themselves, they were generally exploited.

The moment of the game occurred mid-way through the second half when an outstanding break from his own half by flanker Adam Aigbokhae was well supported by prop Jack Parker. The interplay between these two powerful forwards deserved a score but it was to Otley’s credit that they eventually managed to halt the dangerous duo.

Caldy’s Director of Rugby Gareth Davies was pleased to leave Yorkshire with the bonus point win.

“Otley is a tough place to go and we were pleased to start what is likely to be a very difficult February with a bonus point win. Next Saturday we play third placed Manchester’s Sedgley Park at home. This match against Sedgley is the second of four in February which could define our season.”

The match between Caldy and Sedgley kicks off at 2.15 p.m. at Paton Field on Saturday 8th February.