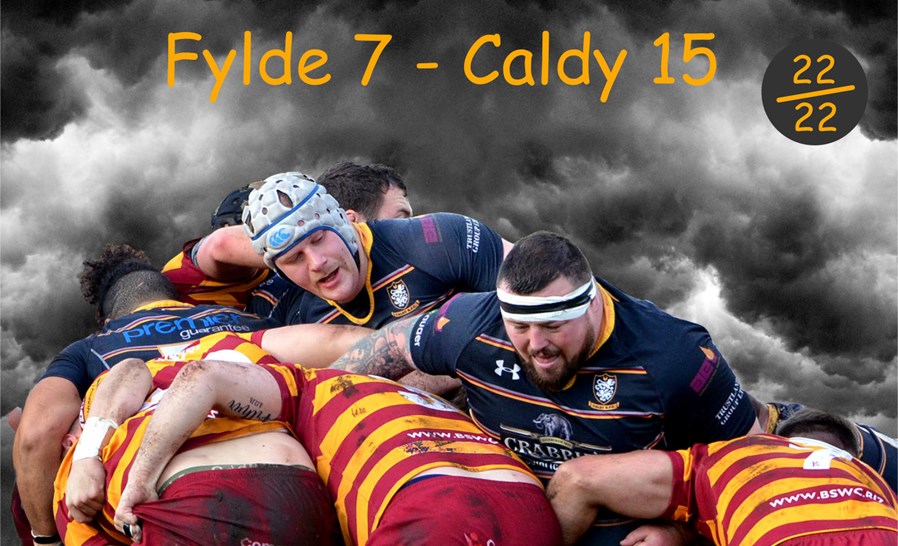 Gritty, committed, relentless are just three adjectives that could be used to describe the performance of both sides at the Woodlands on Saturday as they battled each other and Dennis in an absorbing struggle at the top of National 2 North. Whether it was in defence, in attack or in their match day tactics, Caldy just had the edge in all aspects of play against 2nd placed Fylde.

In the first half Caldy played against what was a bit more than a stiff breeze and after just 5 minutes winger Nick Royle showed why he is still one of rugby’s best finishers. Some determined play by the Caldy pack positioned Caldy just outside the Fylde 22 metre line and quick hands gave Royle a chance. His pace and trickery were just too much for the home defence and Caldy were 5 nil to the good. Such was the strength of the ‘breeze’, the attempted conversion by Gavin Roberts was always more likely to reach the Caldy uprights rather than bisect the Fylde posts and so it proved.

The rest of the half was attritional. Caldy’s powerful pack forced a succession of penalties. Kicking for goal was futile, but it gave the visitors control of the ball and the game. Surprisingly with the benefit of the storm at their back, Fylde never tried to play for field position. Quick tapped penalties by Fylde were a strange tactic in such conditions as their attack was continuously swallowed up by the Caldy defence.

Caldy turned around at half time 5-0 ahead and within seconds the Caldy pack smashed their way upfield to put the outstanding and indefatigable Adam Aigbokahe over for a try under the posts. This time Gavin Roberts needed just the merest of nudges to record the conversion.

Fylde are a top side and after standing up to further Caldy pressure early in the second half, they came storming back. Using giant centre Scott Rawlings as a bulldozer against Caldy’s Mike Cartmill seemed an obvious but ultimately ineffective tactic as the dozer was repeatedly stopped in its tracks. Eventually a yellow card against Caldy gave Fylde the numerical advantage to score under the posts.

Any hope the home side had to rescue something from the game was dashed when Roberts kicked the simplest of penalties to seal their 22nd win of the season and increase Caldy’s lead at the top of the league to an impressive 21 points over 2nd placed Fylde.

Three injuries during the week had necessitated a reshuffle in the Caldy line up and Head Coach Matt Cairns was quick to praise the performance of the players who had stepped in at short notice to such a big game. “This season it is all about building strength in depth throughout the senior squad and the guys who stepped up did terrifically well, particularly Tom Cornall who came in with only a day’s notice and was up against one of the best players in the league in Tom Carleton.”

Next week Caldy travel to 4th placed Sedgley Park for another huge game in this formidable February.