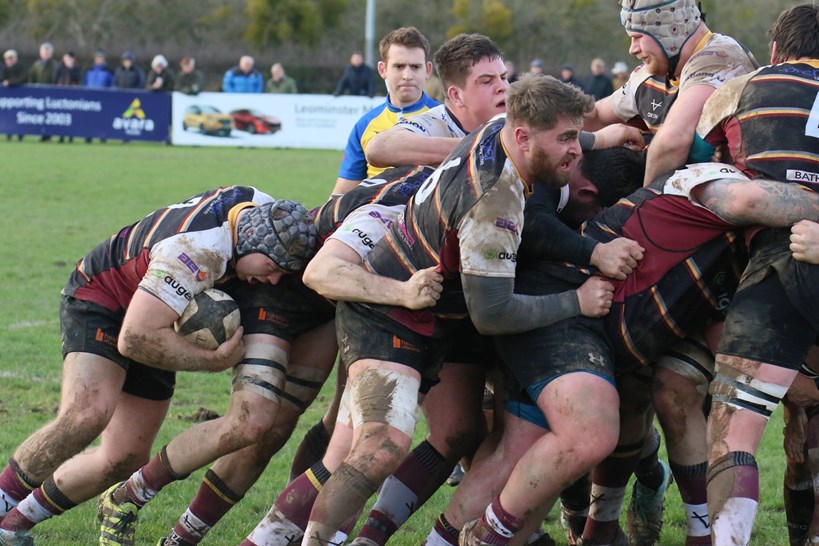 Playing away in Leominster against a Luctonians side which had won the last 5 out of 7 matches was never going to be an easy fixture for league leaders Caldy and so it proved.

The home side’s tough and resilient approach was helped by a heavy pitch which was to make scoring difficult. The first quarter of this physical game was dominated by the home side before Caldy’s speedster Nick Royle broke the deadlock, outpacing the home defence to score in the corner.

All it had needed was one mistake by Luctonians and Caldy had pounced. This was the essential difference between the sides. Luctonians had their chances but couldn’t take them. Caldy took all of theirs.

With a penalty from Gavin Roberts and a further try by the exceptional Adam Aigbokhae, only countered by a solitary Louis Silver penalty for Luctonians, Caldy ended the half with a 17-3 lead.

Fired up by a passionate home crowd, whose rhythmic banging of the advertising hoardings was expertly orchestrated by the tannoy announcer, Luctonians hurled everything they had at the visitors.

But nothing worked, the Caldy defensive wall couldn’t be breached. Try as they might Luctonians couldn’t get through it, couldn’t get around it and couldn’t get over it. When the inevitable mistake was made by the home side, Caldy exploded into action with further tries by Lewis Barker and the Welsh Wizard Gavin Roberts.

In the final ten minutes Caldy defended their line as though their 31-3 lead had been erased. Their stubborn grittiness during the remains of the game showed how and why league leaders Caldy are one of only three sides in the top echelons of English rugby to have a perfect winning record.