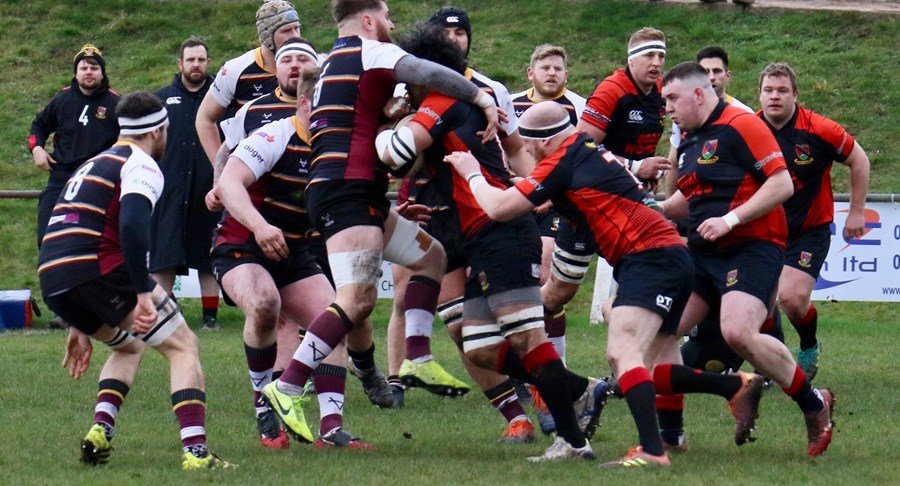 In a gritty and tough encounter Caldy preserved their 100% record with a win over Hull but it was close as visiting Birkenhead Park legend John McNally acknowledged. “It was a superb high-octane game of rugby between two good sides with Caldy coming out on top. Caldy’s win wasn’t just happenstance, they were more clinical and had the edge over Hull when it mattered”

Hull started the brighter putting Caldy under the cosh, bringing an early penalty for Simon Humberstone. Caldy were making uncharacteristic errors which Hull were not clinical enough to exploit. Normally Caldy provide very few chances to the opposition. The visitors would rue not being able to convert these rare opportunities.

Eventually a couple of penalties from Gavin Roberts and tries by home favourites Cameron Davies and Harrison Crowe were enough to counter a converted Charlie Beech score for Hull. Caldy’s first score followed a good period of possession and a midfield break by powerful second row Martin Gerrard. Finding himself in the clear didn’t phase the big forward. He expertly drew the defence to put in Cam Davies under the posts.

Harrison Crowe’s score was all about Caldy’s forward power. After good work between forwards and backs the pack took over, driving Crowe over the line to put Caldy 20-10 ahead at the break and narrowly in the ascendancy.

In the second half Caldy noticeably lifted their tempo. After a period of possession, outstanding flanker Adam Aigbokhae powered his way past numerous Hull defenders to score under the posts. Caldy searched for the bonus point and seemed to have secured it with a flowing backs move which was surprisingly overturned for a forward pass. It was Hull speedster Michael Adlard who scored late on to conclude the match. Final score Caldy 27 – Hull 17.

McNally commented “Caldy were perhaps not at their best today but when it mattered their precision and control were impressive. They will take some stopping.”

Although after 19 wins from 19 matches Caldy are 12 points clear of 2nd placed Fylde Caldy’s Director of Rugby Gareth Davies considers February to be pivotal.

“Next week we have a very tricky fixture away at Otley and on the 8th of February we have 3rd placed Sedgley Park at home, followed by the away fixtures at Fylde and Sedgley at the end of the month. Our season could turn on our progress in February. We need as much travelling and home support as Wirral can muster to help us navigate February’s difficult matches”