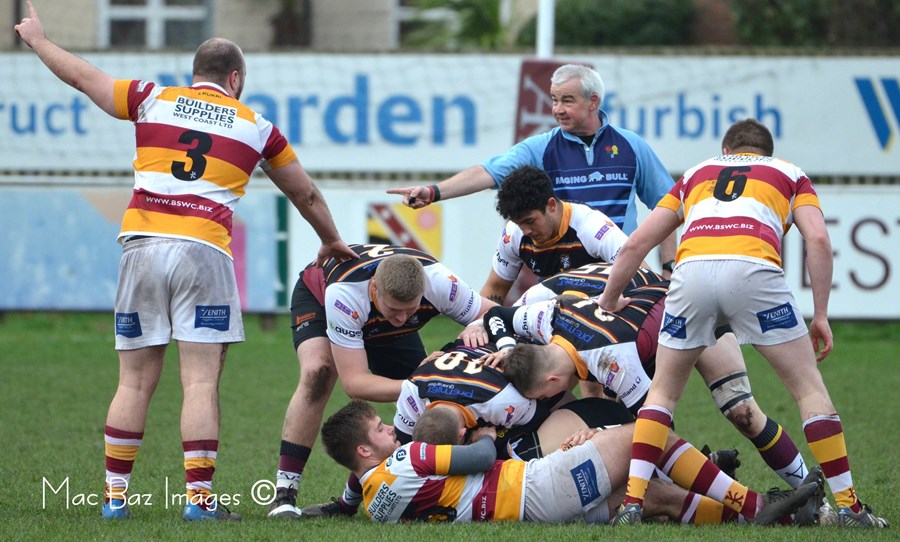 Last Saturday Caldy’s 2nd xv travelled to the Fylde Coast to play the Fylde Hawks at their Woodlands ground. The match was the last in the regular season in the Cotton Traders Premier League and there was a lot at stake. Although Caldy’s lead at the top of the Premier League was unassailable there was the little matter of maintaining Caldy’s perfect winning record. Could it be achieved?

Fylde kicked off with the breeze at their backs, but it was Caldy who threatened first as centre Matt Hooks made a line break, but the final pass was knocked on. Minutes later Caldy thought they had scored a try from a driving maul from a line out, but again the chance was missed as it was ruled out by the referee. A missed tackle by Caldy and Fylde scored from the halfway line, 7-0 to Fylde. This was not going to be easy.

Caldy hit back almost straight away with a try by Mike Cartmill converted by Liam Issacs to level the scores at 7-7. However, it was Fylde who kept the pressure on the league leaders scoring next, wide out on the right wing, but still converted to leave, the score 14-7 to Fylde. As halftime approached Caldy scored out wide through speedster Tom Cornall to leave the halftime score 14-12 to Fylde.

Caldy kicked off the second half having brought on a few replacements and were next to score through Hooks converted by Issacs. A yellow card for big Joe Sanders saw Caldy reduced to 14 leading to a further period of sustained Fylde pressure. Caldy held firm and displaying their usual intensity increased their lead through a converted try by the impressive Dave Jones, to secure the 4 try bonus point and increase the lead to 14-26.

The final score of the game was a second on the day for Cartmill, again converted by Issacs to leave the final score 14-33 to Caldy.

This was a very competitive game against a strong Fylde team which threatened Caldy’s unbeaten run. In the end Caldy maintained their record of bonus point wins in each and every game and completed a perfect 16 bonus point wins from 16 games to win the 2nd team Cotton Traders Premiership by 25 league points with a positive points difference of 440.

That Caldy’s 2nd team achieved this remarkable feat of a perfect regular league season at the pinnacle of North West 2nd xv rugby is a matter of huge pride for the club. This has been achieved through the efforts and dedication of an exceptional group of coaches and support staff and of course the players. After conquering all before them in the league, Caldy’s 2nd xv will now focus on the Halbro North West Cup and Conference competitions.

This Saturday 1st February the 2nd xv squad welcomes Blackburn to Paton Field in the quarter final of the 2nd team cup with a 2 pm kick off. There will be some great rugby on display so please come down and support a quite exceptional group of players.