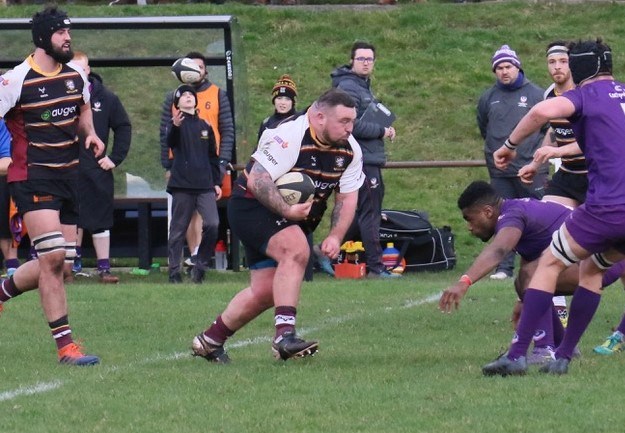 Last Saturday’s emphatic 41-7 victory over a powerful Loughborough Students side was a very good result in difficult conditions for league leaders Caldy. The platform for the win was laid down by their dominant pack and a suffocating defensive effort which repelled everything the athletic Students tried to throw at them, until the very last play of the game when the visitors grabbed a consolation score.

With their nearest rivals Fylde and Sedgley Park both losing it stretched Caldy’s lead at the top of the table to 13 points with a game in hand. However, according to Head Coach Matt Cairns there is little danger of the so far unbeaten Wirral side becoming complacent.

“As a coaching group we are obviously pleased to have extended the unbeaten run to 17 games with a professional performance against a very good side, but that game is over now. We have to start preparing for our next match away at Luctonians. Lucs are very difficult to beat at Mortimer Park and I am sure they would like nothing better than to be the side to bring our winning run to an end”

“There are a number of sides which have started to show some great form in the last 6 or 7 games and Lucs are in that group along with Hull and Hinckley.”

“I would bracket Luc’s Mortimer Park alongside Wharfedale’s Avenue as the league’s most difficult grounds to play at. Both Wharfedale and Luctonians sit at the heart of a rural community and they have the pride and commitment that goes with that.”

“They had a lot of their senior players missing when they played us at Paton Field earlier in the season. This weekend they will be an entirely different proposition.”

Although the Hereford side sits just above the relegation zone this doesn’t reflect the rapid improvement they have made since the start of the season. Five of Luctonian’s six wins have come in their last seven games showing that the newly promoted side has now come to terms with the increased pace and physicality of the league.

Second placed Fylde struggled to contain Luctonian’s big forwards when they played at Mortimer Park in November, just squeaking a narrow 2-point victory. Luctonians clearly gained a lot of confidence from that performance. Since then they have recorded a string of impressive results including an historic first ever win at local rivals Stourbridge’s Stourton Park and last week an impressive away win at Chester’s Hare Lane.

Matt Cairns and his Caldy squad, who also must contend with a long and slow early morning 120-mile journey down the Welsh Marches to Leominster, know just how tough a trip this is going to be.