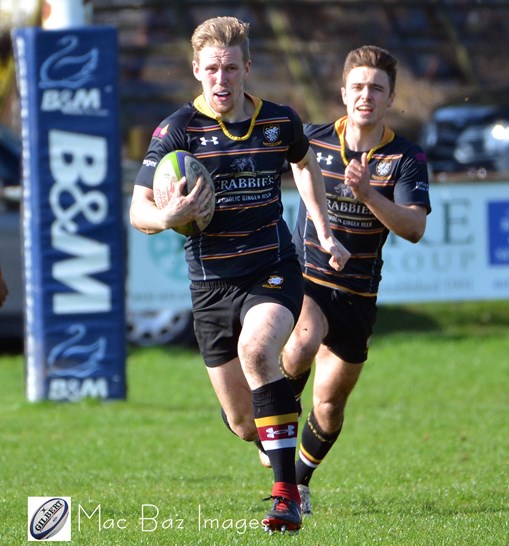 Last week’s weather induced postponement of Caldy’s match away to third placed Sedgley Park left the door open for this week’s visitors to Paton Field to supplant the Wirral club at the top of the National 2 North league table. Unbeaten Fylde took full advantage of the postponed clash between the first and third placed teams with a comprehensive rout of Chester 42 -17.

Fylde is one of the North’s most iconic traditional rugby clubs with an impressive history and pedigree. The Lytham St Annes’ club has current World Rugby President Bill Beaumont as a member and has some of the most famous names in English rugby amongst its cohort of past players. This is Fylde’s centenary year and their ambitions to regain National 1 status are clear.

Caldy and Fylde enjoyed a significant rivalry when both were previously in National 2 North with the games always being closely and fiercely contested. Such was the rivalry between the clubs that certain incidents like the ‘battle of the kit men’ established a body of folk lore that is embellished with each new telling. However hard fought the battles were (on and off the pitch!) there was always great respect and post – match camaraderie between the sides (and the kite men!).

In the 2010/11 season Fylde won National 2 North at a canter playing scintillating attacking rugby under the guidance of former England coach Brian Ashton, with the playing flair of Rugby League and British Lion legend Jason Robinson and the speed of one Nick Royle! Impressively Fylde retained their National 1 status for 7 years with their entertaining all action style generally keeping them in amongst the promotion contenders at the top of the league.

In the 2017/18 season player retirements left Fylde with a young and inexperienced squad which didn’t have quite enough grunt to keep them in a very physically demanding National 1. Those youngsters have now matured and under Head Coach Warren Spragg they have developed into a very fine side capable of re-joining and being highly competitive in National 1

Fylde has enjoyed a great October. Their unbeaten record so far this season is marred only by an early season derby draw against fierce rivals Preston Grasshoppers. This impressive form has pushed them to the top of the table and along the way they have picked up a number of national accolades. Top scorer and fly half Greg Smith, who has scored 108 points so far this season, has been recognised as the National 2 North player for October and the RFU has lauded Fylde as the team of the month throughout the entirety of the National Leagues.

Fylde’s purposeful march to the top of the league is a formidable statement of intent as Caldy’s Head Coach Matt Cairns acknowledges. “This could be the most important game of the season for both clubs and to be honest we really needed to have the Sedgley game behind us before taking on Fylde. They are a very good side with pace, power and rugby nous in abundance and there is a danger we may be under cooked this week. A week off without a game may not seem a lot but it does upset the rhythm and if we are even 5 percent below our best Fylde will punish us.”

Fylde carry threats throughout the team with a very physical pack containing the experience and formidable presence of prop Adam Lewis alongside a number of destructive ball carriers including 2nd row Oli Parkinson and No 8 David Fairbrother.

Out wide Fylde have all the components necessary to execute their renowned running game as Cairns explains “Fylde have a very good squad with a mixture of experience and some seriously good young talent particularly in the wider channels where Connor Wilkinson, Tom Carleton and Tom Grimes are sitting high up in the League’s try scoring charts. Scott Rawlings brings some truly exceptional power in the middle of the park and he has all the skills to put these very talented backs into space. Our lads know what they are going to be up against it, and they are excited by the challenge that Fylde will bring.”

Head Coach Matt Cairns has selected the following squad for the home game against Fylde.

The club house is open for all to join us on Saturday morning to watch the World Cup final between England and South Africa. We will have tea/coffee and Breakfast available as well as a cosy log fire to add to what should be an incredible atmosphere.

The first Caldy Touch friendly series “Stay In Touch” takes place on Saturday 9th November.
This event will see Caldy host local teams and will help to develop ‘02 Touch’ in the local area.
Touch Rugby is a fun all-inclusive sport and we will be hosting, Mixed, Men’s and Women’s games.
If you are interested in joining us, either playing or supporting and you want to get fit fast please contact Angela Griffiths on 0770 837 2199

29th November we have the Golf Day at Caldy Golf Club. £350 per 4 ball this includes Breakfast, lunch and guest speakers. For any more information or to enter a team please contact Rachael rcwrugby@gmail.com

The cost of sponsoring a game is £500, contact Rachael rcwrugby@gmail.com for further details.