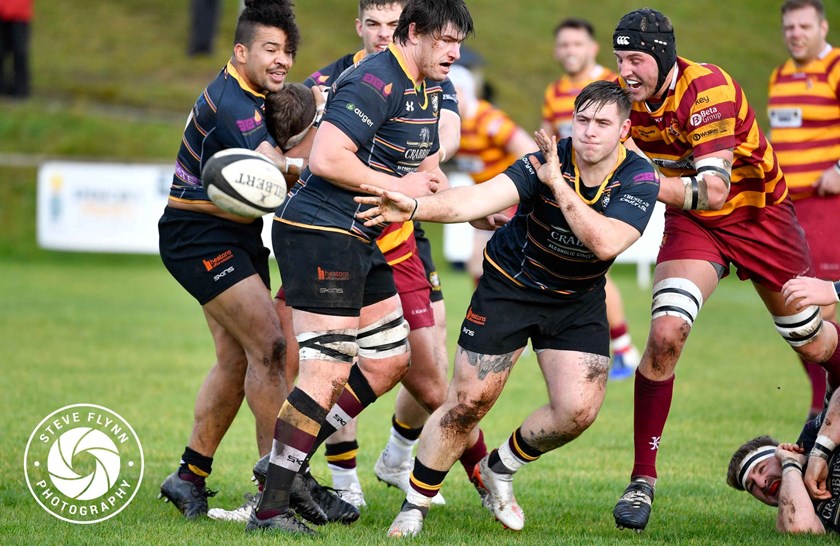 Last week’s hard earned 25-18 win over close rivals Fylde RFC was not enough to lift the Wirral side back to the top of the table after the previous week’s postponement against Sedgley Park but with eight wins out of eight starts Caldy’s Director of Rugby Gareth Davies was satisfied with the performance.

“The difficult conditions were always going to influence the way the game was played, and it was a very physical battle. We won a close game through our defence and our dominance in the set piece exchanges. Fylde picked up the losing bonus point which just keeps them ahead of us in the table, but we have to be happy with the win, Fylde are not going to lose many matches this season”

Caldy’s satisfaction with the continuing unbeaten run was tempered by the tragic news coming from this week’s rivals Scunthorpe RFC of the untimely death of their 23-year-old player, James Walker.

“Scunthorpe’s devastating news puts everything into perspective. It was a very sombre moment at Caldy when the news came through and we appreciate how very difficult it must be for everyone at Scunthorpe RFC” said Davies. “Rugby clubs come together in adversity. This Saturday’s match at Heslam Park will be very emotional for everyone but I am sure it will demonstrate the rugby community at its very best”

Scunthorpe secured promotion to the National Leagues last season after pipping rivals Luctonians to win the Midlands Premier League. They have endured a difficult start to the season having not yet secured a league victory, but they came very close against Huddersfield and Sheffield Tigers, losing both games in the final minutes.

“Scunthorpe have picked up 5 bonus points which shows they will be competitive in this league” said Davies. “They are at home and in the difficult circumstances they will certainly be highly motivated. For obvious reasons this is going to be a very difficult match for everyone. We hope that together with our friends at Scunthorpe we can all put on a terrific game of rugby”

Caldy give a debut in the match day squad to 19-year-old front row forward Tom Clarke and a first start to 21-year-old speedster, Cameron Owen.

The match kicks off at Scunthorpe’s Heslam Park at 2.00 p.m.

‘A Walk for Justin’ for the MND Association