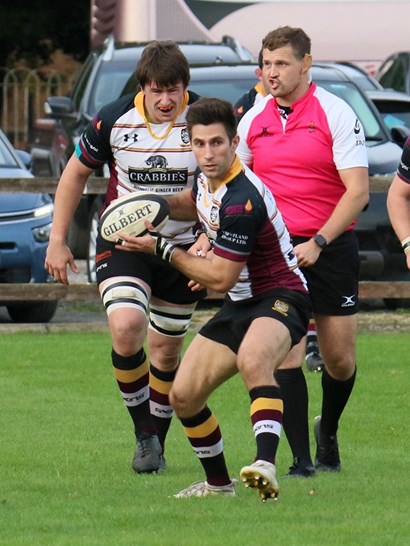 Caldy went into the game against a powerful Hull RFC side somewhat concerned that the long coach journey could lead to a costly slow start by the visitors. However, they needn’t have worried it was the home side which was caught napping. Two tries in the opening three minutes from an alert Caldy rocked Hull onto the backfoot. First it was centre Gavin Roberts who sauntered through the home defence to touch down straight from the kick off. This score seconds from the start obviously wasn’t quite enough to wake Hull from their slumbers because they then generously and inexplicably gifted Caldy a second try seconds later.

As the Hull restart bounced straight into touch, Caldy’s Tom Sanders spotted the opportunity to take a quick throw to unmarked speedster Ben Jones who scorched in from 50 metres. Quick thinking from the 6ft 8 inch Tom Sanders had put the visitors 0 – 12 ahead with barely three minutes played!

“Sometimes early scores can be costly for both sides” said Sanders “After such a tremendous start we sat back for the next 20 minutes somehow thinking the job was done and it nearly proved costly. We allowed Hull to get back into the game. That is dangerous against good opposition, they rallied and we had a challenge to stop their momentum from building”

Within ten minutes of the start Hull had dragged themselves back into the contest with a penalty try from a driven lineout bringing 7 points for Hull and a yellow card for Caldy hooker Ted Stagg. But the home side’s revival suffered an immediate setback as 14-man Caldy went straight back upfield to chalk up their third try through the dynamic Adam Aigbokhae.

The half ended with a successful penalty kick from Hull to take the home side to within a score of Caldy at 10-17.

As the second half began Hull were dominating both possession and territory but there was seemingly no way through the visitors’ defensive cordon until a well worked move eventually got outside the Caldy wall to bring them level at 17-17.

It was the visitors turn to respond and they did so conclusively. Making full use of their strong bench, Caldy freshened up their efforts and impressive flanker Callum Ridgeway ran in Caldy’s fourth bonus point try from 30 metres to break the deadlock.

The game was made safe for the visitors by the imperious Gavin Roberts who attacked from the Hull 10 metre line and stepped his way past four or five flat footed defenders to score his second try under the posts.

Caldy’s backs coach Richard Vasey was pleased to leave Hull with a 5-point haul. “We showed character to reassert ourselves when Hull came back at us. Sometimes it is not easy to do that when you race into a lead and perhaps subconsciously relax. The 1st xv are 6 from 6 and the 2nd xv are 5 from 5. This is where we needed to be at this stage of the season if we have aspirations to be in the mix for promotion. There is a run of very tough fixtures over the next 4 or 5 weeks and we need squad depth if we are to sustain our challenge”.

Player Support – Kenny Roberts – always made the Tea exactly the way the lads liked it. – Also the only player I know to get arrested at half time!