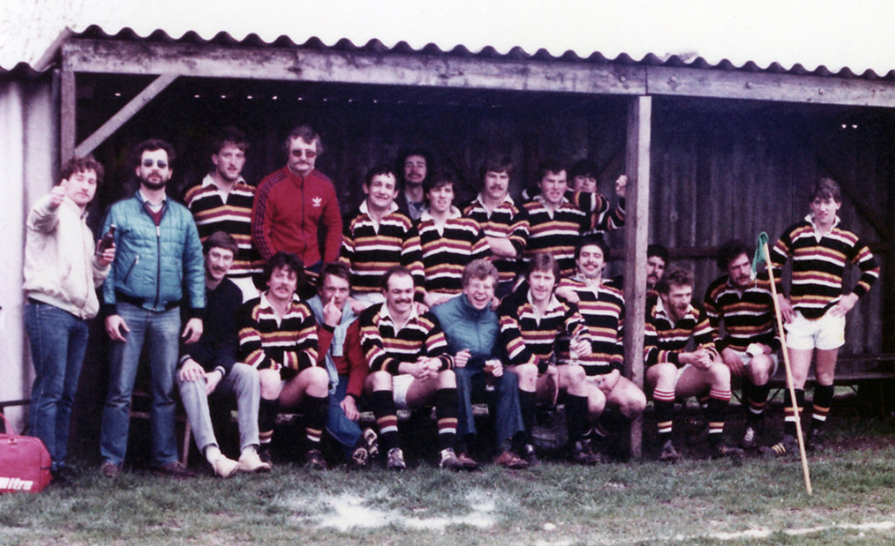 Full back. Robin Johnson. Robin left Caldy and captained New Brighton and played for North of England before returning to Caldy in the mid 1980’s. Simon Mason for his goal kicking was a strong contender but Robin gets my vote for his all round football ability

Wing. A tough call between the master of the interception Peter Welton, Mike Merry and Andy Nicholls. I have gone with Mike but him and Andy were both very elusive and it was a difficult call.

Outside Centre. It has got to be Gavin Roberts for his fantastic defence and brilliant breaks. An honourable mention for Andy Blackstock as well.

Inside Centre. The toughest of decisions to select with Barry Quatermass, Marcus Coast and Shaun Woof all big, strong and hard running players. It has to be Shaun for me but a very difficult choice. There were also a father and son in contention as well with Frank and Matt Pennington.

Winger. Nick Royle is the ultimate try machine and a definite for my team

Fly half. Two contrasting styles but for me it is between Rich Vasey and Jack Lavin and my vote is for Rich who at his best was a points machine.

Scrum half. Jon Broxson was the little general who controlled the tempo and Nigel Harwood – Smith the maverick with an electric burst of pace. I am going for Nigel – the only player I have ever seen being chased by his own team mate around the pitch.

Loose head Prop. For his singing as well as his propping Charlie Barwood gets my vote although it has to be said Roy Farebrother pushed him hard

Hooker. My choice is between Ian McManus and Ted Stagg. Ted has proved to be a great player but my vote is for Ian, who was the player who chased Nigel because he put the ball in on the oppositions side at a scrum. Ian was a Scotland B cap and a ferocious competitor

Tight Head Prop. What a choice between Matt Holt who is one of the strongest ball carriers I have ever seen and Derek Salisbury. For scoring 50 tries it has to be Derek.

2nd Row. Front of the line has to be either Paul “The Duke” White, Kevin Brandreth or Jack Collister. 3 tough players with the Duke as my choice.

2nd Row. My choice is between the one and only Mike Newby and Tom Sanders. Tom is a great player with good hands, athleticism, loads of heart and an incredible work rate but my vote goes to Mike. From a bygone era of rugby when it was considered effeminate to let water be splashed on you from a bucket let alone to see a physio Mike had one of the biggest hearts in rugby.

Open Side Flanker. Alan Roberts has undoubtedly played more 1st XV games than any other player in the Club’s history – and somehow managed a drop goal as well. My difficulty is fitting some of our other excellent back row forwards in such as Harry Broadbent, Stuart Andrews and Nyle Davidson. Al gets the vote for the number of games he played

No 8. A tough choice between Sam and JJ Dickinson, Loa Tupoa and Andy Norman. Andy would have been a professional in a later era and Sam has played at the highest level and I think Loa was a Tongan international but for ball playing ability and acceleration off the back of the scrum it is JJ for me.

Blind Side Flanker. A father and son competition between Steve Hare and Jake Lyon with Jake getting the edge between the two but I can’t ignore the challenge of Harrison Crowe either. A very tough call and i would be more than happy to have either in my side.

Coach: the current coaching team are doing a great job but I think they need at least a full season behind them before I can vote for them. So I am going for Tony Atherton. Tony coached us on at least 3 separate occasions and his attention to detail and demanding standards led to immediate improvements and winning teams.