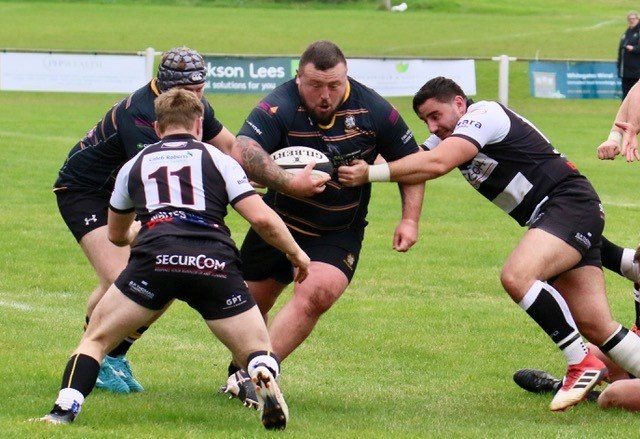 When the Luctonians scrum took a tremendous ball against the feed the visitors must have thought they could perhaps get something from their trip to Merseyside but then Caldy flicked the turbo switch and showed just why they are unbeaten at the top of the league.

However, as if stung by the affront of losing a scrum on their own put in at the next set piece the home side smashed the Luctonians scrum to rubble and proceeded to ruthlessly exploit the fractures that then began to appear in the rest of the Luctonians side. Caldy’s suffocating press defence trapped the visitors behind the gain line time and time again and Luctonians had no answer.

Caldy’s head coach Matt Cairns will have been as pleased with the style of play as the bonus point victory. The togetherness and unity possessed by all top teams was clear in the home side, throughout the entire 80 minutes and it was very necessary. Luctonians never gave up and were ready and able to capitalise on any Caldy mistakes. But after the end of the first quarter Caldy never gave them a sniff.

Caldy were dominant in all facets of play surgically scoring from mistakes by Luctonians to run in 9 further tries with speedster Nick Royle scoring 4, the peerless Gavin Roberts picking up a brace and further scores from Rhys Hayes, Martin Gerrard and Adam Aigbokhae.

Terrific combinations and interplay between Caldy’s forwards and backs lit up Paton Field. Whether it was the prop duo of Jack Parker and Derek Salisbury waltzing together upfield to put Nick Royle in at the corner or the silky-smooth Gav Roberts feeding the effervescent Ben Jones, Caldy were a threat from any part of the pitch. The platform was laid up front and particularly from the clattering impact and link play of Caldy’s back row for whom openside

Adam Aigbokhae was so truly outstanding he eclipsed 4 try Nick Royle for the Man of the Match award.

This was a well-constructed victory based upon teamwork, power and a coherent and well executed game plan. Caldy will be satisfied with their clinical performance against a battling and wholehearted Luctonians side which never gave up.